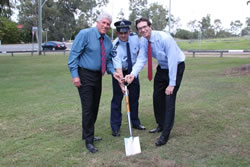 It’s been a long path leading up to the construction of the new Carina Police Station, while the Queensland Police Service has been outgrowing the former Camp Hill Police Station.

Some coverage from the South East Advertiser from the past three years:

13th March 2009 – New Carina police station doubts
30th April 2010 – Carina cop shop farce
6th January 2011 – 2010: What stirred us up (Number 4 of 10 points was Carina Police Station. The article said: Although first promised in 2006, it’s announced the station will not be built until the first half of 2011 and will be of “prefabricated design”, attracting criticism it is a “cheap fix”.)
29th April 2011 – New police station increases presence

In a press release, Member for Chatsworth Steve Kilburn says that, upon its completion, the new station will provide a modern, first-class policing environment for officers and civilian staff members in the area.

Mr Kilburn says the $2.5 million project will include modern operational features such as an equipment store, intelligence office, general dayroom and store, electronic interview room, holding cell, exhibit store, general amenities and a major incident room for major police investigations and, potentially, a base for the coordination of natural disasters.

The site of the new Carina Police Station is at the corner of Narracott Street and Creek Road. Minister for Police Neil Roberts said delays experienced with the project were largely around the identification of a site. It is currently expected to be completed by the end of the year.

Below is from a communication sent by Steve Kilburn’s office to local residents leading up to Easter:

I am very pleased to be writing to you with some good news for Carina/Carindale residents. As you know the plans for the new Carina Police Station have been on the drawing board for some time. Since my election in 2009 to be your local Member of Parliament, I have been keeping a close eye on this project to ensure that it is delivered to our community. I have been in regular contact with the Minister to follow up on the various processes and procedures required to obtain all the necessary approvals. During a sitting of Parliament in February I asked the Minister to provide an update on the progress of the new Police Station development. Earlier this month I gave a speech in Parliament outlining the benefits to our community of having a new Police Station in our area. You can read both the Minister’s response and my speech in full on my website (stevekilburn.weebly.com).

On Friday 15th April, I met on site with the Minister for Police, Neil Roberts, when we officially ‘opened’ the initial site works to prepare for the Station’s construction. I am therefore happy to report that the new Carina Police Station is now formally in the construction phase.

The new Carina Police Station will be a state-of-the-art facility, specially designed and purpose built for modern day policing now and into the future. The station will be more centrally located in the district, allowing police to better serve Carina, Carindale and surrounding suburbs. The new Station will also complement the existing Carina Ambulance Station and the PCYC. I know that our local Police Officers do a remarkable job looking after community safety and being able to operate out of a modern, well resourced Station will only translate in to more benefits for the community they serve.