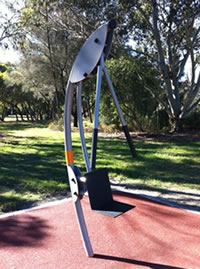 New equipment has been put in place at Carindale Recreation Reserve.

I really like to see community areas being catered for like this and I asked Deputy Mayor Cr Adrian Schrinner a bit about the latest park development.

The equipment was funded from a budget initiative that will see similar upgrades rolled out in district parks across the city.

Deputy Mayor Cr Adrian Schrinner (Councillor for the Chandler Ward) says the Carindale Recreation Reserve is an ideal location for this equipment as it is one of the most popular and well-used parks is the eastern suburbs.

“The park has great equipment for kids for a number of years, and now we have something for adults as well,” Cr Schrinner said.

“I’ve already received some positive feedback about the equipment and some people have started making it part of their daily exercise routine.”

“Our local area has some great parks and Council is committed to investing in them for the benefit of local residents,” He said. 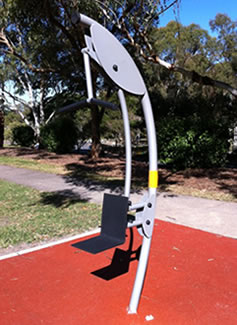 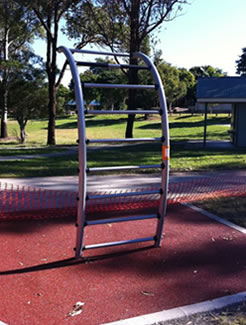 The equipment, positioned around a circuit track near the basket-ball half court, was supplied by Moduplay, a commercial play equipment company established in 1989. The pieces are Norwell Fitness brands which they describe as combining “beautifully and artistically with the surroundings.”

There is “soft-fall” rubber bases for each piece of equipment. There is some tidying up to do near one of the pieces, but the other pieces of equipment are available for use.

The Carindale Recreation Reserve, at the corner of Bedivere and Cadogan streets, is the site of many community activities. I cycle through it quite often and always see lively activity there. It was the starting point for the Fit Kids Community Fun Run last week and it’s also the location of activites such as bootcamps and pilates classes.

I’m hoping the fact that it’s a busy park will mean it’s also likely to be chosen as one of the 20 parks to get wireless internet. Brisbane City Council plans to spend $2 million to set up a wi-fi service in 20 busy parks across Brisbane by June 2012. This follows the trial that has run in the Brisbane Botanical Gardens in the city. 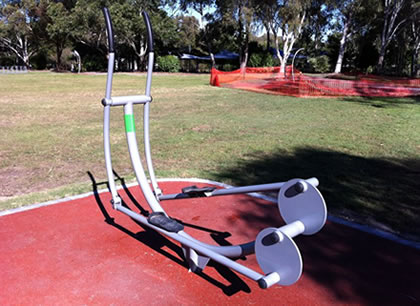 Do you visit Carindale Recreation Reserve or other local parks? Let us know what you think about our parks, their facilities and initiatives like this via the comments section below.

One Response to “New exercise equipment at Carindale Recreation Reserve”