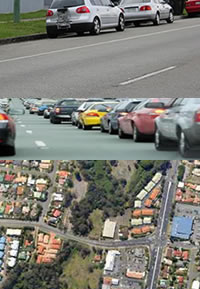 It’s a big week for transport and traffic news. We welcome you to leave your comments at the end of this post and join the conversation with your neighbours.

There’s a new petition regarding the bus services along the Creek Road corridor and the need for better cross-suburban services between major hubs such as Carindale and Garden City. The petition, posted online yesterday, asks for the introduction of additional bus services between Garden City and Carindale via Creek Road. The chief petitioner is Ian Walker, LNP Candidate for Mansfield.

Lord Mayor Cr Graham Quirk handed down his first budget today. There is $552.8 million in the budget for improvements to the suburban road network.

Today’s budget includes pedestrian safety improvements for Winstanley Street, Carindale and for Cuthred Street, outside Carina State School. We’ll also be keeping a keen eye on the Carina Heights Bikeway development (Abbott Street to Jones Road) as this is a busy area and it would be great for more cyclists to use this safer option and for it to be another motivation for people to cycle.

“My personal pet peeves are trying to get a park at the Carina Post Office and the terrible u-turns people do on Scrub Road to park their children right outside the door of Belmont State School,” Kerryn says.

Kerryn says she’s seen two accidents recently on the way to school along Winstanley Road right next to the roadworkers fixing the gutters.

“Those guys must cringe everytime a car goes past,” she added.

We recently discussed the topic of a park and ride facility at Carindale. Steve Minnikin, LNP Candidate for Chatsworth was the chief petitioner. 274 signatures were obtained and there was some interesting discussion about it on our website. The petition closed at the end of April and it has now been referred to the Minister for Transport, Annastacia Palaszczuk MP.

Some related transport and Brisbane budget media articles
Brisbane buses running empty (Brisbane Times, June 8th) – “The Securing 2026 review by management consultancy AT Kearney on behalf of Brisbane City Council shows 28 per cent of bus services are “dead running”, where passengers are unable to board.”

What transport and traffic issues are on your mind?

We welcome you to leave your comments in the section below. Or, if there’s something completely different you want to discuss or you’d like to write a focus piece, why not use the ‘your say’ feature at the top of the site.

2 Responses to “Transport, traffic and the budget”