I was invited to a morning tea that was run as part of the campaign for LNP Candidate for Mansfield, Ian Walker, last weekend at the Upper Mt Gravatt home of Stephen and Rosemary Bowers. 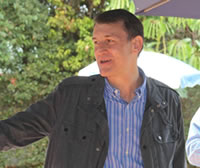 In a casual speech to guests, Mr Quirk said the media are very keen on comparing him to Campbell Newman.

“Well, the robes are shorter on me, and I have a different style,” Mr Quirk said.

“We want a city that will keep dealing with traffic congestion and flood recovery,” he said.

Mr Quirk said he wants Brisbane to be the “cleanest and greenest” Australian city and the most “accessible and inclusive”. 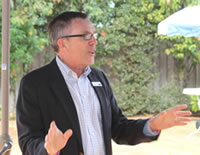 Mr Quirk endorsed Mr Walker for the state seat of Mansfield and said his experience “sets him up for a great long career in Parliament”.

Ian Walker is a senior partner for the law firm Norton Rose. In his speech, Ian reflected on his recent door knocking in the area as a new and unusual experience for him.

He said that his biggest motivator for change in the region is that “Queensland now has the worst of all state economies”.

Declaration: A free ticket (cost $30) was given to Carindale Connect. I must also note an incredible selection of sweet and savoury treats and bubbly!