The second Carindale Community Group Forum was held on Wednesday night and there were plenty of new faces.

Representatives from the SES Eastern Group and Police Sergeant Darren Smith were the main guest speakers. 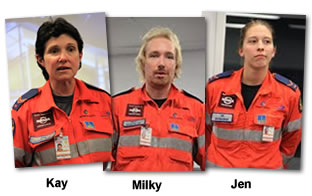 Kay Turner of the SES explained some of the activites they are involved in, such as storm and flood damage, crowd control and land searches.

They highlighted their top recommendations for storm preparation including clearing gutters to avoid problems from overflow and overhanging branches.

Cr Adrian Schrinner also explained some of the council tasks and rules relating to removing trees or branches for safety and easier to access footpaths and the like.

He said, however, that one of the great features people see when they come into Brisbane is the greenery and that we shouldn’t be excessive with tree removal.

I was happy to hear this. I think it’s important humans adapt to the enviornment when possible in preference of removing a tree because we’d otherwise have to walk around it.

There were plenty of questions from the audience ranging from personal safety matters, issues with trees in the area to how the SES is funded.

Cr Schrinner said he thought it was great to have representatives from the SES on hand to let residents know about their work and provide important tips on preparing for the summer storm season.

“I commend Glenn Millar for organising the forum and I also want to thank the Belmont State School P&C and Carindale Connect for the valuable help and support provided as well,” Cr Schrinner said. 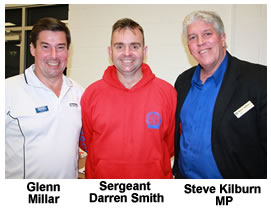 Sergeant Darren Smith gave a good overview on various policing matters in the area. He said that the region was “fairly good” in relation to crime.

“It’s important that you judge us on the work we do at a local level.”

Sergeant Smith spoke about some of the typical crimes in the region and tips to taking precautions where possible. He said the rate of crime has remained fairly constant and house break-ins have shown an overall decline in the past few years.

“We don’t get the serious crime as a rule and that says a lot about the good community it is,” He said.

The Solito apartments were discussed in relation to crime problems which have now been eradicated. Sergeant Smith said Solito was a good example of local council and State Government, in particular Adrian Schrinner and Steve Kilburn working well together to bring about a positive solution.

Heather Smith of Belmont State School P & C raised the problem of people not adhering to parking rules outside the school. Ms Smith said it is creating potentially very dangerous situations for children and it’s time to start implementing fines. She said a huge amount of effort and time has gone into educating people about it but she now believes people won’t take notice until it hits them in the hip pocket. This will be a good idea to follow up a bit further down the track to see how the situation has progressed.

Steve Kilburn said the presentations showed the hard work the SES and Queensland Police Service do throughout the community to assist in times of need and to mainatin a high level of public safety.

“As an ex-firefighter, I have worked with the SES and the QPS on many occasions and know first-hand that they are highly trained problem-solvers and skilled emergency workers,” Mr Kilburn said.

“These community forums are a goldmine of useful and interesting information for residents,” he said.

Most attendees stayed back afterwards for a chat and coffee. It was nice meeting people who lived nearby and discussing issues relating to the area and community.

I spoke to a lady at the forum who told me how she and her husband had formed friendships with a group of people they used to wait at the bus stop with. She said they would chat there each morning and decided to create a regular social get-together at one of their homes. I love hearing neighbourly stories like this. The coffee and biscuits before and after the session allow for some informal conversations, many of which have inspired me for some future posts!

The next Carindale Community Forum is on Wednesday 28th September at 7pm. I look forward to seeing you there.