While the queue grew quickly outside, I was able to join a media preview of the store that was held about an hour before opening to the general public.

A passionate Apple representative took us through the store and a range of products. He started by promoting the Apple Store app and we were encouraged to open it up on our iPhones to better experience the store. 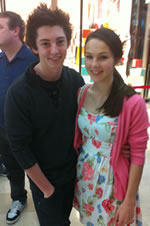 Ben and Emma of Carindale were among the first 100 customers.
Emma says she’s glad she doesn’t need to travel to Chermside now.
“I’m only here because Emma made me!” Ben says.

He pointed to the tables of products around us highlighting OS X Mountain Lion, iPads and the iPhone 4s. When discussing the laptops he emphasised the superior retina display of the Macbook Pro and the speed and lightness of the Macbook Air.

Later in this session there was a demo of EasyPay, part of the Apple Store app. The EasyPay app, which was launched in Australia on 12th July, allows a brilliant scan and pay option for Apple accessories utilising a product’s bar code, the iPhone camera, the customer’s Apple password and credit card details.

Seamless and quality experiences are a key part of Apple’s marketing message. The rep said the store’s services help Apple users get more out of their products and to interact with the store. Their training is closely tied in with product, with their “One to One” service only available for purchase at the time you buy a Mac. “One to One” provides both personal training and group training and it’s $129 for a year. 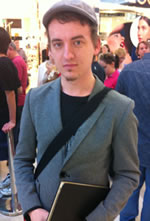 Hamish of Bowen Hills describes himself as an “absolute fanatic” when it comes to Apple. He used to work at Apple Chermside. “Coming to these stores is like a community thing for me.” “It’s a very beautiful store, quite amazing.”

The Genius Bar, a table of clever looking people down the back, provides face to face technical support and troubleshooting. They recommend making a reservation in advance and require that you backup the data on the device that you need help with. Someone at the store can check you in or you can do it on the Apple Store app.

Personal Setup is another of Apple’s in-store services. Carindale Apple staff can get you started so you can leave the store with your product up and running, such as getting photos on your iPad before you leave the store.

I’m aware of many people who don’t take advantage of how various products work together, especially when it comes to data and syncing. Using the Personal Setup could save a lot of time – and relieve the relatives who are often called upon when someone in the family gets a new device!

I spoke to siblings Edwin and Anne-Marie who came from Bethania to Carindale to join the first 50 or so customers in the queue.

Edwin said he uses both Windows and Mac. 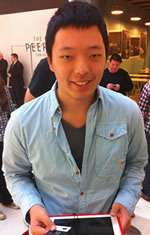 Wayne of Cannon Hill, who was in the queue playing around on his iPad, says he’ll be coming to Carindale more now.

“I haven’t had an issues with it and I’m a bit of a klutz when it comes to technology. It just works.”

Anne-Marie says her only problem with the Carindale store was the paid parking.

“Because I feel quite rushed with it, so if I do want anything it will be rush in rush out. It’s a real shame because I love Carindale.”

“I can drive down to Robina and hang around for hours and hours and go to the Apple store,” she said.

The actual opening of Apple Stores are quite a spectacle and occasion indeed.

There was a team pep talk going on inside the store and the loud cheering and clapping could be heard several shops away.

Then the staff formed two lines behind the doors. The Carindale store employs 100 staff and it looked as if nearly all of them were there today. With security staff (from both Westfield and Apple) keeping a close eye on things, they opened the doors and the staff came out cheering and running down the length of the queue.

There were excited high-fives, cheering and general craziness. 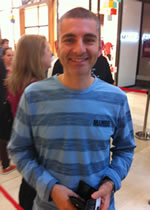 Frank of Carindale said he lined up early so he could be one of the first 1000 customers who get a free t-shirt.

They then came back into the store and got ready to finally welcome everyone in. The queue at this point being at least 500 people long.

Julie from River Hills was first in the queue. She says she was “covering” for her son.

However, with her iPad in her bag and an Apple Chermside t-shirt on, I’m pretty sure she was an Apple fan-girl from way back.

There was lots of cheering and clapping for the first lot of customers as they were let past the rope and into the store under the direction of security staff. It got busy and frantic very quickly.

The Carindale Apple Store is in Westfield Carindale on the Ground Floor.

2 Responses to “Carindale’s first bite of the Apple”