We visited the garden of Rolf Kuelsen in Cannon Hill on Sunday. Chickens, solar power in action and an array of edible things were on show. 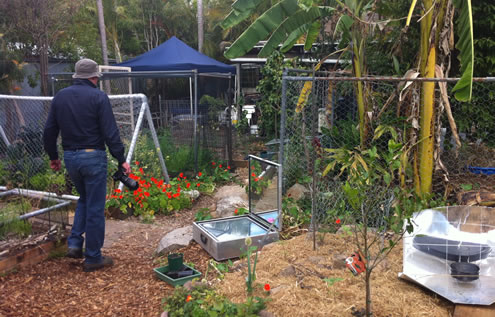 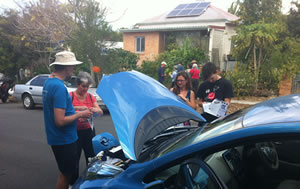 Rod from Local Power was showcasing his electric car outside Rolf’s property.

His garden was open as part of Sustainable House Day. Our recent article talks about SHD and provides a summary as to how Rolf’s garden was transformed earlier in the year.

From the front of Rolf’s house we saw the solar panels and solar sucker on the roof and a concrete slab on the ground that has been created for a cob oven.

He says he often gets asked for gardening advice and hands out free plants while spending time in the front of his house.

“With footpath gardening and front yard gardening you get to engage with your neighbours and people walking past,” Rolf said. 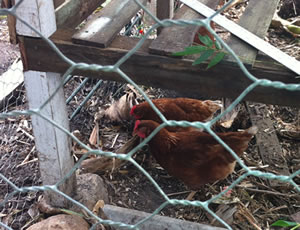 “Eventually I’d love to get some seats put out here as well so we can have a bit of a gathering.”

He pointed to bamboo on the western side of his house which he says will provide some wind and sun protection down the track.

In summer he grows loofahs and uses them for dishwashing and scrubbing. I was surprised to learn that when they are small you can eat them like a zucchini.

He has loads of parsley growing really well through a crack in the driveway. 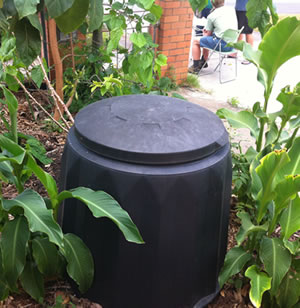 “Parsley just goes nuts. It’s amazing where you can grow stuff,” he said.

His garden has plenty of nasturtiums and he told us he made a nasturtium pesto for a dinner party that night.

We had a try of the nasturtiums pods that Rolf says are great used on pizza. They are strong and similar tasting to horseradish.

“If anyone’s game,” Rolf said as he held out his hand with some of the pods to the people gathered around him. 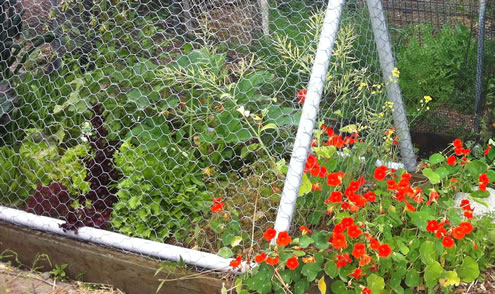 There are two solar cookers in the garden and one of them contained some lentils cooking, apparently destined for a curry.

Two types of solar cookers in the garden. 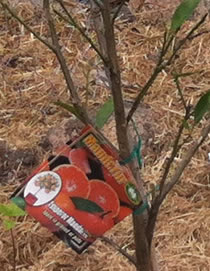 The fruit and vegetables in the garden look to be flourishing.

“If you’ve never tasted fresh asparagus – it’s a treat,” Rolf told us with much enthusiasm.

He discussed his passion for community, gardens and landshare.

“If you get a 90-year-old next door neighbour who loves to garden but can’t actually garden anymore and doesn’t get that much community, you can get them to garden the place. Share the food and stuff and get some company and it’s a win win win situation,” he said.

Rolf was very welcoming, handing out free seeds, things to taste, providing a table of flyers about sustainability and a spot to enjoy a cup of tea or coffee. 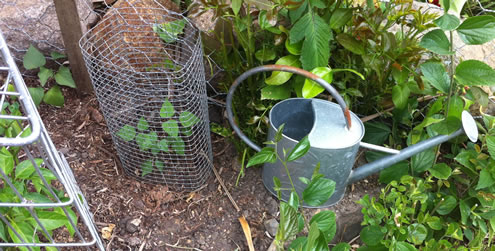