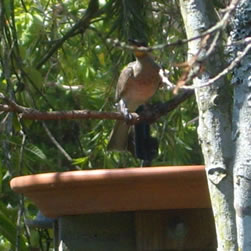 Among the benefits of having more birds in your yard is pest and weed control, flower pollination, environmental / wildlife conservation, increasing the attractiveness of your property, education and enjoyment.

The Southside Sustainability Centre at Carindale has its monthly open day this Saturday and it includes a presentation on this topic from author and fauna expert David Barnes.

David is author, along with Ann Moran, of ”Fauna friendly plants of South East Queensland” (2001). He also wrote various articles including ‘Fauna Friendly Structures’ in Wildlife Australia Magazine (2002). David was also a contributing author to the Wild Plants of Greater Brisbane, Queensland Museum, 2003.
His garden was part of the Australian Open Garden Scheme for three years (1999 to 2001) and was featured on ABC TV’s Gardening Australia and Channel 10’s Totally Wild.

David was interested in nature from an early age.

“At the age of about three, much to my mother’s horror, I brought an earthworm into the house to watch TV with me,” David says.

He spent three years of his childhood in Malta where his Father was posted from the British Army.

“There were lots of wild places near our house and school [in Malta] where I would try to catch lizards, butterflies and generally get absorbed in things wild,” David said.

“I would often get up in the middle of the night and go into the bathroom to watch the geckos that lived behind the bathroom cabinet, scurry about catching moths and other insects that were attracted to the bathroom light.”

“My father gave me my first set of binoculars and a copy of the “Observer’s Book of Birds” when I was about 8 years old and back in England, shortly before we emigrated to Australia in 1969.”

“At that age I was also keen at drawing and my subjects were generally birds or mammals,” David says.

These days in his professional life David is known for his plant identification skills but still maintains a keen interest in all Australian fauna including native fish and invertebrates.

“I have been one of those fortunate people who have been able to earn a living doing something that I love,” he says.

“I guess one of the major causes of a lack of fauna diversity – not just birds – is that back yards lack of structural and species diversity. As a society we are obsessed with lawns and tidiness. One of the important vegetation layers for fauna, even birds, is the ground layer where grasses, ferns, and herbaceous plants grow and where fallen logs provide habitat for insects and small reptiles,” David explains.

He says most people are generally very intolerant of invertebrates such as insects and spiders, with a few exceptions such as butterflies, bees and ladybirds.

“And yet these are the basis for many food webs. Even honeyeaters need insects to feed their young,” David adds.

When: Saturday 2nd February 2013
– 9am with a tour of the gardens
– 9.30am-10.30am Presentation by David Barnes – attracting birds in your yard.
– Morning tea provided, followed by outside activities between 11am-12noon – could be any of planting, habitat building, weeding, seed collecting or whatever needs to be done.