Some of the region’s newest Australians were welcomed in a local Australia Day citizenship ceremony at the Belmont Services Bowls Club at Carina on Saturday. 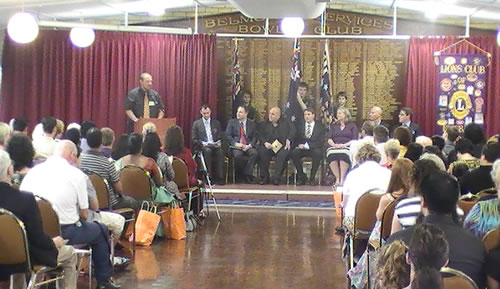 The Australia Day citizenship ceremony event has been hosted by the Camp Hill – Carindale Lions Club for the last 13 years. The group’s President David Greenup was MC for Saturday’s event. 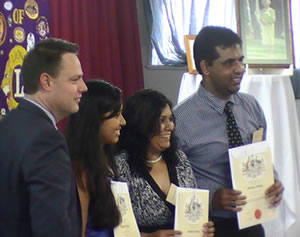 Deputy Mayor & Councillor for the Chandler Ward Adrian Schrinner has been presiding officer for the ceremony for 8 years in a row.

Cr Schrinner gave the opening address and read through the rights and responsibilities of Australian Citizenship.

“The most important thing that you’re given as an Australian Citizen is opportunity. That’s the opportunity to pursue your goals and dreams for yourself, and for your family, in a free and democratic nation,” Cr Schrinner said.

He said Phillip Di Bella of Di Bella Coffee, the event’s guest speaker, was an example of such opportunity.

Mr Di Bella spoke about his family’s migration to Australia and how Di Bella Coffee got established and went on to flourish in Australia. 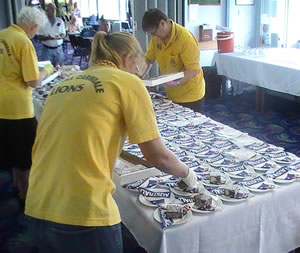 Lions volunteers setting up the table of lamingtons and Australian flag napkins.

He joked that if the new citizens didn’t drink coffee they could have their citizenship taken back. He talked about the company’s success – from achievements in service and systems here to exporting overseas.

“It all came from humble beginnings – the son of a migrant,” Mr Di Bella said. 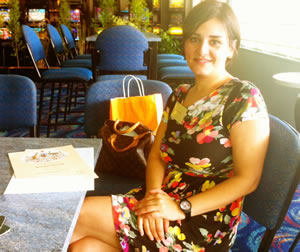 After the official ceremony I met Shiva Mohsen Zadeh, a Carindale resident and, as of minutes earlier, an Australia citizen.

Shiva is from Iran and has been living in Australia for 10 years. She’s a registered nurse in an emergency centre, a role that she really enjoys.

She received her Bachelor of Nursing from Griffith University in 2004 and went on to get her Masters in Public Health.

This Australia Day was the first time this local event has been held at the Belmont Services Bowls Club. It has previously been held at Westfield Carindale. The bowls club function room provided a more relaxed and community-themed setting overlooking the bowling greens.