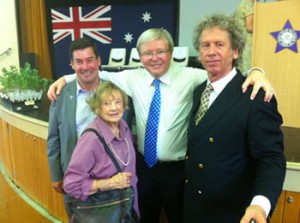 He was nominated by Glenn Millar, the founder and host of the Carindale & Eastern Suburbs Community Forum.

Glenn Millar says John has tirelessly supported both his community forum and many other local groups and associations.

“He has become our local history guru, giving many detailed and fascinating speeches to our group on local history, geography and topography, enthralling locals with his knowledge,” Glenn said.

“I agree with Kevin Rudd, that these awards are more relevant and important than the official Australia Day Awards, because they recognise genuine locals who have given many years of commitment and time to local charities and community groups, who go unrecognised by our communities,” he said.

This is not a short post, but I really felt that it was important to document some of John’s interesting and community-focused background for other locals to appreciate.

John was a committee member of the National Trust of Queensland 18-35 Group from 1973 to 1976. He assisted with preparing heritage walking tour guide for Spring Hill, and with restoring historical church at Samford.

He also worked at the National Trust of Queensland as a research officer and continued on as a volunteer.

He was a member and then committee member of the Royal Historical Society of Queensland’s “Young Historians”.

In 1982 he was founding member of the Queensland chapter of the Australian Aerobatic Club and competed in the inaugural Queesland State Aerobatic Championships at Amberley. He took advanced flying training for his Commercial Pilot’s Licence in 1983. Following that he parachuted dressed as Santa Claus for a disadvantaged children’s Christmas Picnic.

Later he was carrying out freight flights for the then Central Queensland charter operator “Piccolo Aviation”. He flew as a volunteer and officer for Queensland Police Services’ Longreach Station undertaking aerial surveys of security arrangements for the opening of the Longreach Stockmen’s Hall of Fame. by Queen Elizabeth II.

He was a founding member of Neighbourhood Watch Camp Hill 5 in 1993. He undertook a variety of activities including producing the group’s newsletter, organising speakers, fundraising and arranging awards for significant or long service by neighbourhood watch activists. He has also presented at a Carina Neighbourhood Watch meeting briefing members about the history of Carina and district.

In 1995 he became the founding member of Bulimba Creek Protection Society. He initiated projects on behalf of the group, writing a history of the Bulimba Creek Valley. An extract of this was published in the Brisbane City Council’s Bulimba Creek Catchment Plan and “Know Your Creek” booklet.

He received a Brisbane City Council Local History grant to help with research costs and the establishment of a website for that history.

John was active with the Bulimba Creek Catchment Coordinating Committee from it’s second meeitng in 1997.

Some of his activities then included  leading canoe trips, producing the group’s early newsletters, running displays and driving the bus of B4C members on excursions.  He also helped with fundraising for the Bulimba Creek Catchment Environment Appeal in 2006 at an event at the Cannon Hill Anglican College.

He was also a part of the Norman Creek Catchment Coordinating Committee, joining them in 1998. He assisted with suburban street plantings and running displays at community events. As an extension of his activities with N4C he got involved with a landcare project at Bennetts Rd bushland – from when it was administered by the Windsor International Aid organisation and the Brisbane Regional Environment Council, then later during a campaign by local residents and activists to save the bushland from becoming the site for a fire station.

As a joint venture between Whites Hill-Pine Mountain Community Group and SCRUB and enlisting the help of special education school students, John created a small garden of native trees in Cavendish Road High School at Holland Park. It included a plaque commemorating the life of his Latin teacher who taught at the school 40 years before who had died 6 months earlier.

John regularly participated in bushcare working bees each weekend for SCRUB (Save, Care for, and Regenerate Urban Bushland Catchment Care Group). He became Displays and Promotions Convener for the group.

In 2000 he ran a display at Belmont Primary School and gave an associated presentation to the Grade 4 students. After having drawn ideas from that display those Belmont school children assembled their own display. They then entered it into the Griffith University’s Quest for Excellence and won 2nd place in a field of 92.

In 2001 John ran a display for SCRUB at the launch of Brisbane City Council’s Carina Shopping Centre Improvement Project. Within this improvement project he served as a community representative for Belmont & Districts Historical Society, in the project’s steering panel until the Shopping Centre refurbishment was completed.

John joined RiverMouth Action Group (RAG), an environmental lobby group, in 1997. From 2007-2009, partly stemming from the group’s previous campaigns to save bushland at Minnippi West, for local iconic wildlife, he then undertook, with a partner, an appeal in the Planning and Environmental Court. It was against the local government authority’s decision to allow a development on the site. He helped raise funds for the appeal, a briefing barrister, ecologist and town planner. He was able to negotiate some concessions from the developer at a mediation phase. So far, the development has not proceeded.

He joined Coorparoo & Districts Heritage Group (CDHG) in 1997 and their committee in 2000. He was involved with organising guest speakers and getting sponsorship from local businesses.

He staffed CDHG stalls with displays about local and family history expos which included compiling display materials and devleirign spoken segments. His determination in his role is exemplified by, in 2008, his performing this duty, while in a wheelchair having just discharged himself from hospital temporarily following a leg fracture from a motorcycle accident.

He became a founding member of the Belmont and Districts Historial Society (BDHS) in 2000.

In this role he gave briefings to Carina Primary School children to prepare history captions for plaques in Carina Shopping Centre refurbishment project of 2001. He got consent from Brisbane City Council to have additional plaques created and mounted in the shopping centre, with BDHS information on them including poetry written by Kate Carina for whom the suburb is named.

He assisted President and Vice-President with running displays at Brisbane History Group’s seminar at Queen Alexandra Home Community Centre in 2003, addressing the heritage of Belmont.

John became Chair of the society in 2003 and chaired bi-monthly meetings for the next 2 years. He also conducted heritage tours of the Belmont district for BDHS members and others.

During his time with BDHS he began planning and fundraising for proposed project to erect plaque commemorating crew and passengers who lost their lives in the crash of a QANTAS airliner at Mt Petrie in 1942. He traced family members of crew and passengers for the unveiling ceremony. He also got local businesses and community service organisations involved to sponsor the plaque and unveiling event. The plaque, of which he organised the design and manufacture, was installed in the old Town Square precinct at Westfield Shopping Centre, Carindale.

The ceremony was in July 2005. It was hosted by John and had nearly 300 people in attendance. He arranged for early Australian aviatrix Nancy Bird to act as guest speaker. There were several aviation history groups running displays, a 1920s vintage QANTAS bus on display. The event conculded with a salute and fly-past by 3 1930s vintage De Havilland aircraft. Tragically three of the people who were involved with the fly past lost their own lives in the crash of the classic biplate in the Sunshine Coast hinterland in last year.

At present John is attending to the refurbishment of the plaque which had to be removed for the redevelopment of Carindale Westfield. He thinks that this may have to be funded by himself.

As a founding member of the Friends of Christ Church & Cemetery at Tingalpa, he assisted with early restoration work on the church building and grounds. He arranged for milling of paling tops into a “steeple” shape, capitals for the tops of fence posts and the construction of the fence itself. John donated the cost of the milling and wooden features. He also assisted with the early fundraising functions to pay for restoration costs.

He was also a member of the English Speaking Union (ESU) Queensland branch where he helped organise guest speakers, organse programs and events and the like.

He joined community environmental legal aid provider, Environmental Defender’s Office (EDo) in 2007. He made donations, in addition to his membership subscription, by way of supporting the work of EDO.

He joined Friends of South East Queensland (FoSEQ) in 2007 and is still a member of this environmental lobbying umbrella group. In 2009 he led a delegation of three senior FoSEQ members and two outsiders to a lobbying conference regarding better protection for Natural and Built Heritage assets in and around Brisbane. This was with Kate Jones, the then Minister for Environment and Sustainability and Cameron Dick, the then Attorney General and Minister for Industrial Relations and member for Greenslopes.

John’s assistance was also requested for the opening celebrations of the Clem 7 Tunnel. He was asked to find classic cars to take part in a cavalcade of period vehicles, led by then Lord Mayor Campbell Newman, in a contemporary Brisbane City Council bus.  As well as enlisting special vehicles he also entered his own classic vehicle, a 1964 Austin Healey Sprite.

He works now with Brisbane Transport at the Carina depot. In his standard passion for sharing local history, he presented the depot’s social club at their 2011 Christmas Party, with two framed photographs depicting the site of the depot in the 1930s and 1940s as wel as an old Belmont Bus stranded on the Old Cleveland Rd Bridge, over Bulimba Creek in flood in 1931.

Over 2011 and 2012 he researched, wrote and self-published a 159 page history of the first 30 years of Cavendish Rd State High School and Holland Park for the school’s 60th anniversary celebrations. This publication includes material drawn from interviews with 25 former staff and students. He has a strong connection to the school with is family all teaching and/or studying there from 1957 to 1981.  A summary of the book was also published in a 3rd volume of Mt Gravatt Historical Association’s Local History Compendium.

The community is lucky to have someone like John who cares so much about the region and its heritage and environment. We’ve got lots of local questions for John so you’ll be able to read more about him, and his insights, on Carindale Connect again soon.

We thank the people who helped put together John’s Griffith Australia Day Award nomination for providing us with extensive detail for this article.