George Kambouris’ sporting achievements have seen him represent Australia in powerlifting, be ranked first in Queensland and second in Australia for handcycling as well as win medals in swimming, track and basketball. in 2000 he was inducted into the Greek – Australia hall of fame for powerlifting.

Others now have a chance to tap into his expertise through the programme he is developing which aims to help kids with day-to-day lifestyle tasks as well as sporting pursuits.

George, who has been living in Carindale for the past 17 years, was born with Spina Bifida. He uses a wheelchair and drives an adapated car.

His plans are to help kids in wheelchairs learn important skills that he believes are not being taught enough or in the right way. He also wants to encourage and assist these kids to try out, and then hopefully further involve themselves, in sport.

“When I was growing up with my parents there was no support to learn how to do things. There is the support now. My parents learned as we went along,” George said. 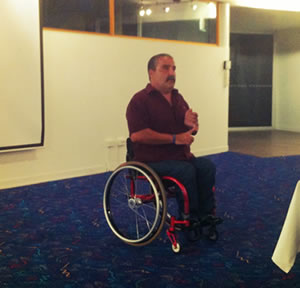 He says his “Living on Wheels – lifestyle and sporting” educational programme can teach a child practical wheelchair skills and can also develop into wheelchair sporting activities.

“So if the kids want to get into sporting ventures when they get older, we’re there to help them as well,” he says.

“Whatever life throws at them we’re going to be there to support them and help them along the way.”

Kids, according to George, are overprotected these days.

The program aims to help with tasks using a wheelchair that are often presumed a child will just learn and get used to by themselves.

“The chair might not tip up, but it may.”

George says there has been good support for his programme from; local businesses; the Carindale PCYC, in particular sergeant David Beard; and Member for Chatsworth, Steve Minnikin. He now needs to get it funded.

Sport is a huge passion for George and he wants to give kids an opportunity to try as much of it as they can.

“I’ve been doing sport for as long as I can remember,” he says.

“There are people with Spina Bifida who use crutches, calipers, frames or something like that. I was never one for using frames, didn’t like anything on my legs. I wanted to use the wheelchair – it was easier, it was faster to get around – speed demon!”

Paralympian athlete and coach, Eric Russell has been an important mentor to George.

It was Eric who really got him into sport.

“If it wasn’t for sport, I wouldn’t be sitting here talking to you. Sport saved my life.”

“When I was a young kid, I always liked sport but didn’t know what I wanted to do. Until I was given – swimming, track and field and powerlifting. I sucked at swimming. Even though I did get a bronze medal in my first event. But I didn’t like it.

“Track and wheelchair racing – I fared a bit better. But I still didn’t like it because I like to do my own thing. That’s how I got into powerlifting. Powerlifiting I won the event and that’s how I got my opportunity to represent Australia.”

George is well placed to be an excellent mentor and inspiration for kids who are wanting to get the most from their wheelchair and themselves. He’d also like to see further growth in Australian handcycling.

“Handcycling has been in Australia now over 10 years now. It’s still growing. We’re still trying to get more people involved.  In Europe, the UK, America it’s huge,” he said.

I asked George about how he saw the profile of Paralympics developing.

“Last year in London was the best coverage we’ve had with the Paralympics. It can be better but that will come over the years,” he said.

“Years ago, we got half an hour of a night time on ABC Radio or ABC TV – just highlights, nothing live. The community has changed with that too.”

George recalled how, during the Sydney games, his nephew would refer to the “Paralympics” and the “non-Paralympics.”

When I caught up with George he was preparing to go to Round Two of the National Hand-cycling Series (NHS) in a mainly management role.

Due to injury, George has had about 16 months away from his handcycling but is getting back into it again now. He’s also been held up by the recent wet weather. He used to go out in the rain without a care, he says, but is “more sensible these days”.

George is currently seeking support for his “Living on Wheels” programme. He’s seeking interest from venues and schools that want to participate, funding and sponsorship help and people to simply spread the word around the local community.

We also welcome you to add your comments below!

One Response to “George Kambouris helping kids living on wheels”