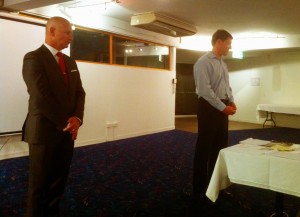 Mr Vasta said that he was having a meeting at his office with Australia Post on Thursday to discuss the issue.

“I hope that we can actually resolve this sooner rather than later,” he said.

“I will be taking this to highest level that I can.”

As we announced on 29th January, Australia Post plans to close at Westfield Carindale on April 26th and reopen at the Metropol on April 29th. 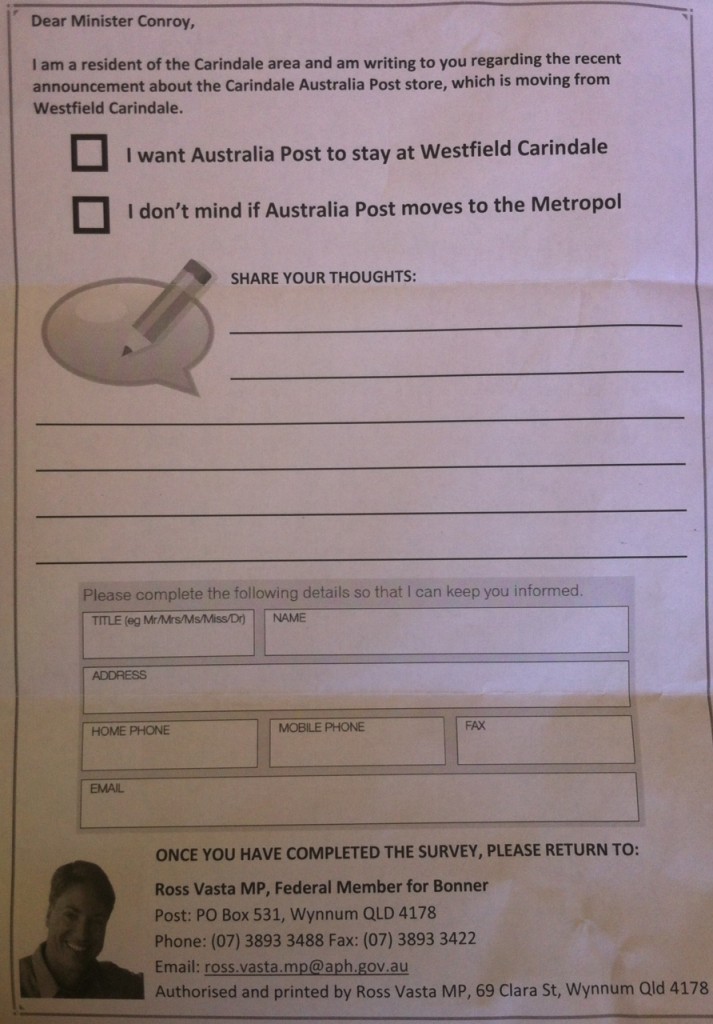 Mr Vasta’s office recently sent a hard copy survey to local residents asking their views about the move. The survey, Mr Vasta said, of over 8000 residents showed that: “overwhelming support was for the Australia Post to remain where it is there in Carindale”.

The negotiations, Mr Minnikin explained, started off with Westfield wanting Australia Post to move from its current spot, but not necessarily relocate outside of the centre.

“But the dialogue then started to take a bit of a plummet down south,” Mr Minnikin said.

“Westfield shopping centre needs to have banks, it needs to have an Australia Post, it needs to have your Medibank, Medicare, etcetera. Sure, they get their big rent from the high end fashion and sporting and what-not, the JB Hi-Fis, whatever. But you need to have a proper mix, and part of that proper mix is a hub of the community.”

“I wouldn’t be surprised if in 12-15 months time, that Aussie Post, through the shear volume of complaints, the carpark bingles and bangles and what-not, centre management sorting out issues all day up there, which I hope doesn’t occur, but if it does and it becomes so problematic, I wouldn’t be surprised, if cooler heads prevail, keeping in mind that some of the staff will have gone from both Westfield and Aussie Post. And maybe common sense will once again prevail.”

“I’ve got a distinct problem with having a Carindale post office and it’s not in Carindale,” Mr Minnikin said.

Mr Vasta said the post office move, which will mean a move from the Bonner electorate to the Griffith electorate will mean it loses representation.

He also said he was disappointed with the lack of consultation by Westfield and Australia Post with local representatives.

“It was a massive clash of egos, that’s really what it was,” Mr Vasta said.

He says he’s aiming to work with Senator Stephen Conroy on the issue.

The Carindale Community Forum has been running for 18 months. This event was the first forum for 2013 and the first at the Pacific Golf Club location (where it will be located for at least the rest of this year). The forum is held on the last Wednesday of the month and is open to all locals.

This was Mr Vasta’s first attendance at the forum, but he told the group that, unless required in Canberra, he would be attending them all.

In this Federal Election year we can expect an increased range of local issues to be heard at the community forum so it would be wise for locals to take advantage of this access to local leaders and use it raise questions and issues.

4 Responses to “Post office move due to clash of egos, say local politicians”