The following is a speech given by Geoff Ebbs, the Greens candidate for the Federal seat of Griffith, to the South East Brisbane Chamber of Commerce breakfast on Tuesday 6th of August at the Colmslie Hotel, Morningside. A short speech was given by each candidate before addressing the questions being provided. 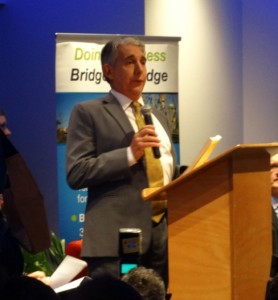 Geoff Ebbs, the Green Federal Candidate for the Seat of Griffith speaking at the SEBCC breakfast.

I’m a member of and gold sponsor of the South West Chamber of Commerce over at Yeronga, so thanks this morning for the opportunity to come here to your chamber, to welcome these politicians and tear strips off them.

Don’t worry, the Greens have been practicing kinder, gentler politics for 20 years, so I’ll be as kind as possible. In the early 90s I started a dot com company. We were advising business on internet strategy before Malcolm Turnbull invented it.

in 2005 I published this book – Hiring and Firing – the smart business guide to employment law. It was never republished after Mr Rudd came to reign over us the first time. And the reason why? Uncertainty. There was not enough clarity around the ALP’s industrial relations policy in 2007 for me to justify sinking another $10,000 into a rewrite.

Unpredictability in government is a business nightmare. The Greens offer you certainty. We believe what we say and we stick to it. Green economic policy is based on the maths: you cannot have infinite growth on a finite planet. Any economic policy  that does not take that into account is simply a magic pudding.

With the Greens, whether we’re in business or in politics, manage to a triple bottom line. We believe in building social and environmental capital  as well as financial wealth. That financial wealth is largely generated by small business, like yours and mine – We employ about half the workforce and we generate more than one third of Australia’s wealth. One of the major challenges for small business is the predatory practice of big business. Think supermarkets and fuel, banking and telecommunications.

The Greens last week announced a competition policy to give the ACCC real teeth and  to tackle the predator. We will increase the legal budget of the ACCC by 50% and grant it the authority to break up large companies that are abusing their power. The Greens will build a robust stable future and  protect small business.

Now Ladies and Gentlemen, the best predictor of future performance is past behaviour. And the past behaviour of these old parties in this last term of parliament has frankly been appalling.

Dr Glasson, your leader has set new lows in sloganeering, in name calling and driving down business confidence.
And Mr Rudd,  your efforts to regain the leadership of the ALP and your U-turns in policy direction redefine the term unpredictability. So I say on election day, don’t reward bad behaviour, vote for a robust, stable future. Vote 1 Geoff Ebbs in Griffith.