We went along to a special assembly at Mayfield State School this week to see the school presented with two lots of funding – one from a Queensland Government grant and one from a CUA grant. 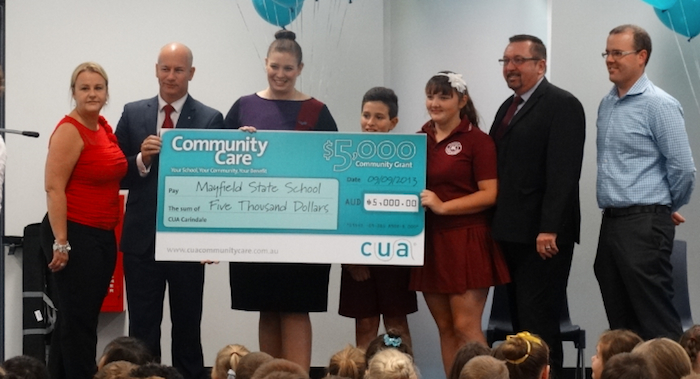 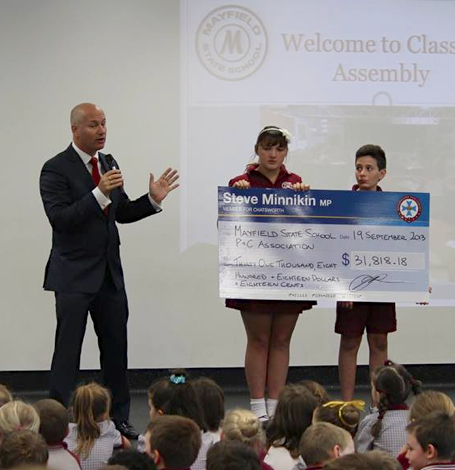 The monies will go towards installing a new playground at the school.

Steve Minnikin MP, Member for Chatsworth presented a cheque for $31,818 that the school obtained from Gambling Community Benefit Fund (GCBF).

The GCBF was established in 1994 by the Queensland Government to provide funding to community groups in Queensland. The fund receives money from gambling taxes and distributes these funds to not-for-profit community groups.

“Thanks must go to the school’s dedicated P&C Association for their role in securing this funding,” Mr Minnikin said.

The community was asked to vote with CUA Community Care on the nominated projects at local schools.

Emma Hinchcliffe, Customer Service Specialist at CUA Carindale, said the response to their Community Care program this year has been incredible.

“We are delighted to present the $5,000 grant to Mayfield State School to go towards the development of their project and hope the children get value and enjoyment out of the new playground equipment for many years to come,” Ms Hinchcliffe said.

Head of the schools P&C, Dan Glass, acknowledged the role of social media in getting the community behind the campaign. He said one of the mums, Samara Phillips, was a key part of driving the campaign.

This is the third year of CUA Community Care, a program linked to CUA’s sponsorship of the national adidas School Fun Run program – a long-standing healthy initiative designed to raise funds for school while making fitness fun.