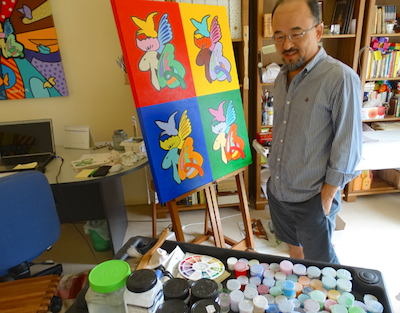 Sung Kyo Kim in his studio at his home in Carindale

Korean-born Sung came to Australia in 1988 and has a background in the mining industry. For 25 years he worked as a draftsman and structural designer, mostly for mining design companies in Queensland.

Sung kindly welcomed us into his home for a chat and to see some of the works that are going into his first solo art exhibition.

Recently completing a BA in Fine Art from Curtin University, he began working full-time on his art practice last year.

“Nowadays, the Chinese language is very important as well as English and I hope that Australian viewers — including Chinese, Japanese and Koreans — will be inspired by my paintings, particularly the next generation. I want my art to be for Asian and Western people alike,” Sung says. 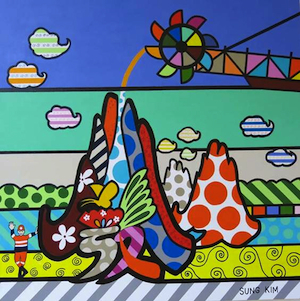 Some of his works are inspired by his time in the mining industry and design and drafting.

In one painting he incorporates the ‘good luck’ symbol and says this expresses the wish for good luck to the person who hangs it on their wall.

“I always feel happy with flowers, butterflies and fishes, especially when I look at my paintings in the early morning. Most East Asian people get the same feeling and I want to share this,” Sung says.

Calligraphy is part of Sung’s heritage and he learned it an early age and continued to practice it in adulthood.  Twenty years ago he learned hyukpilhwa from a Korean master-artist.

Hyukpil is a genre of Korean folk painting dating back to the Eastern Han dynasty (25–220AD). It transforms parts of the character to incorporate symbols which correspond to the character’s meaning. For example, a crane symbolises longevity and a butterfly symbolises joy.

Sung says he enjoys spending his days creating art and looks forward to sharing it with more people.