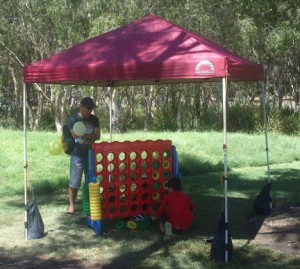 So many activities involve buying more “stuff” (that we really don’t need) – but what about events that encourage human interaction and utilising our great parks and other community spaces?

I love the concept behind Brisbane-based Giant Games as it involves interaction and participation.

We’re excited that we’ll have two Giant Games at our Neighbour Day event on Sunday 30th March. We’re pretty sure we’ll have the Connect4 (great for kids!) and the draughts. Make sure you come along to Bridgnorth Street Park, Carindale to check them out as well as meet and mingle with your neighbours.

Amy is a Landscape Architect and runs Giant Games with her father David. Their website says:

She [Amy] is passionate about activating and “humanising” public space. In 2009 she pitched an idea to the Brisbane City Council. Inspired by childhood memories of playing board games with her relatives, friends, parents and grandparents, and fuelled by her passion to activate public space, she submitted a concept to the Brisbane City Council called “Games Night @ King George Square”. Taking a piece of often maligned open public space, she created a place where people could congregate on the evening of the last Thursday of each month to socialise across diverse demographics, and play board games. 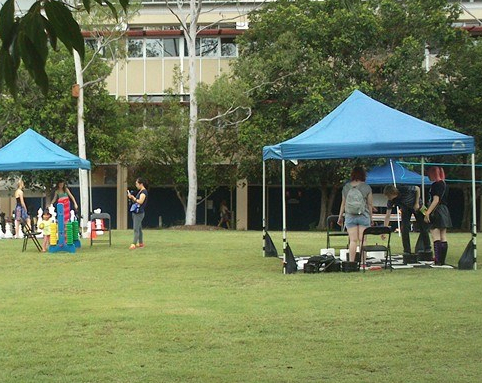 They were recently hosting their Giant Games in Dalby for an initiative by the QLD State Library and Dalby Library called “Dalby Dads”. It was all about encouraging fathers to read books to their children.

They are also growing their ‘Games in the Suburbs’ concept with regular events.

Amy and David are also behind Lazy Sunday Cycle, founded by Amy and another innovator Rachel Smith. It’s a grass-roots monthly community-driven activity to encourage more people to take up bike riding and to visit more great local spots. It recently rode through Minnippi Parklands to B4C in Carindale and return.

I recommend you visit the following: