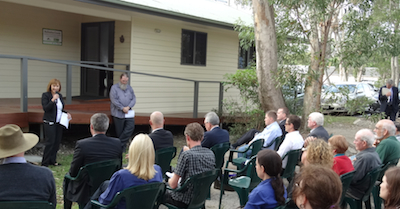 The completion of the office has been long awaited with work starting at the end of 2012. The building was largely completed by February 2013 but it wasn’t until February this year that the sewerage was able to be connected in a way that satisfied both cost effectiveness, environmental considerations and council approval.

The building makes it much easier for B4C to work with their field crew and the volunteers in the garden and nursery. The construction was completed without any grants. The development costs were completely self-funded by B4C. The air conditioning system was donated by BMI. 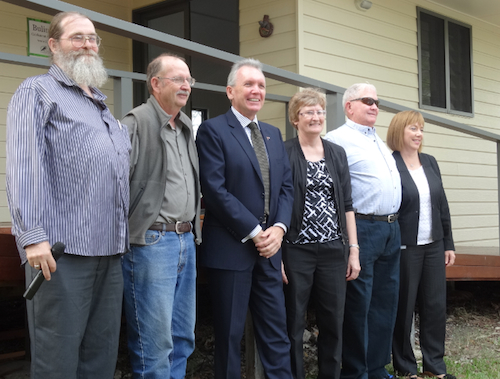 B4C President Mik Petter addressed the group at the opening event. Mr Petter spoke about the importance of a cooperative relationship with politicians and local organisations, with most of the group’s work done on public land. He highlighted the long-standing relationship with Powerlink.

“It shows how you can mix development and environment protection together,” Mr Petter said.

He said he looks forward to developing many more partnerships.

“Whatever we might find in the budget today, we’ll still keep seeking partnerships, however more difficult they are,” Mr Petter said. 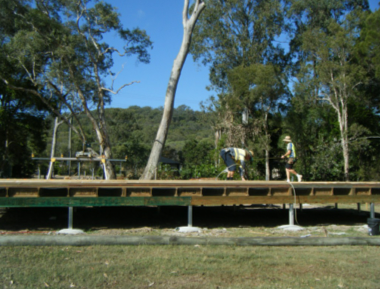 The foundation holes were dug and the floor built in September 2012.

“But we not adverse to getting out there hustling for money and doing commercial contracts and ploughing that money into this organisation. And that’s how this building got built.”

“Our members freely donated their time for commercial activities and the entire profits from all of that work work donated to us and we have built the building with it – something we can all use together – a social asset,” he explained.

Powerlink Chief Executive Merryn York spoke of her organisation’s long standing relationship with B4C and how the effective use of the land came about.

Mark McArdle Queensland Minister for Energy and Water Supply also addressed the audience, congratulating the group and its volunteers.

“You had no funding for this, you did it yourself, that’s an accolade not just to the environmental organiation but to the dedication and committment that you and your people have given to this area. That doesn’t go unnoticed, that doesn’t go uncommented upon,” Mr McArdle said.

“It’s very rare these days to have the fortitude and capacity to build a structure such as this from scratch.” 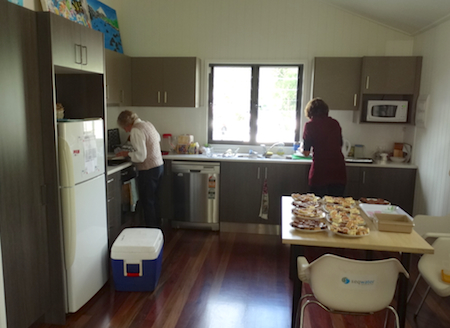 Afternoon tea for the opening event being prepared in the kitchen of the new Sustainability Centre building.

The opening included other presentations, an afternoon tea and a tour of the new office.

GET INVOLVED
B4C are always keen for volunteers and visitors. They have an open day at the Sustainability Centre, corner of Old Cleveland Rd and Wright St, on the first Saturday of every month 9am-12pm. It includes a presentation or workshop, morning tea and a tour of the gardens with various optional activities.

Visit the B4c website, email Heather Barnes or Wayne Cameron at b4c@bulimbacreek.com.au or on 3398 8003.