A local bakery owner is frustrated with the big supermarkets’ negative impact on the milk and bread industry, families and the wider community as well as these products being used as “loss leaders” to get people in the door. But he is taking a stand by making the decision to support a milk product that was almost pushed out of production by big business.

Today at their Belmont store, Uncle Bob’s Bakery got its first order of Scenic Rim 4Real milk.  It is for retail purchase as well as being trialled in their coffee.

“Our business philosophies are very similar, supporting small family local producers. I think that at a level in every community there are people that understand and want to support this style of business,” Mr Noy said.

“Australians don’t like bullies, and when they hear of a situation like has happened to Farmer Greggie they really rally and support such a cause.” 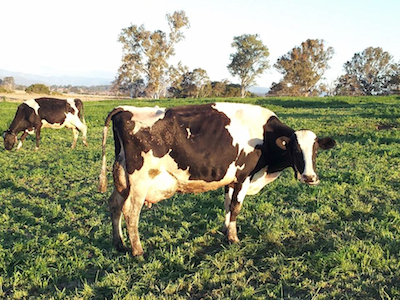 Last year 4Real Milk’s Greg Dennis was told that what he was being paid for his milk would be cut by around 25%.

Concerned that his business would no longer survive, Mr Dennis launched his own processing and bottling plant at a huge cost. He also bought a truck to distribute the milk to shops and cafes. Read Milk war hits premium end (The Australian Dairy Farmer, April 2013) and A dairy farmer’s last stand (ABC, March 2013)

“We have a similar approach, it has never been about the money, it isn’t the focus other than what is needed to survive, it is about a feeling, that feeling you get from doing something well and then seeing someone enjoy the fruits of your labour.” 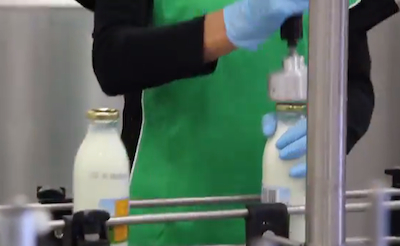 Minimally processed and will low food miles – only sold within a 2 hour drive from their farm.

Mr Noy says that most people aren’t properly aware of what the big corporates are doing to farmers and the wider community.

“Cheap food whilst appearing to be a good thing financially will eventually decimate society. A big call I know, but you must understand what happens to quality and nutrition in the cycle and process of price reduction,” Mr Noy says.

“In order to supply at a cheaper price, quality must eventually be sacrificed, natural replaced with chemical, companies search for ways to increase production in order to reduce labour, and costs to meet the demand of big supermarkets.”

“We end up with an economy as artificial as that which is going into the food we eat,”

He says it’s a downward spiral of wages going up, companies automating, people losing jobs and then reduced incomes mean an increased need for cheaper food. And this also means that the health system becomes overloaded.

“But we end up not eating food. In many cases it is just food shaped objects, filled with starch, artificial flavours, colours, and a cocktail of chemicals to make it look like its going to taste good,” Mr Noy said.

Small producers like Greg Dennis, his own bakery and many others are trying to change this, he explains, by bringing back traditional products that are made using natural ingredients that deliver on taste at a fair price and that contain good nutrition.

“We must, though, be aware that as this impacts the bottom line of supermarkets they will fight back – beware of the marketing hype, stay true to yourself and support where possible small local producers,” Mr Noy urges.

Share your thoughts below and tell us what affects your milk purchasing decisions.