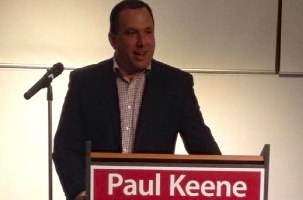 The following is a speech made by Paul Keene, ALP candidate for the State seat of Chatsworth, at his campaign launch event at Pacific Golf Club on Saturday October 25th. You can leave comments or questions at the end.

Thanks so much. Thank you. I can tell you it is an extremely humbling experience to stand here in front of you, with the level of support you’ve offered by being here tonight but also having Annastacia here to launch the campaign. The support and leadership that her entire team has offered me has been exceptional and I’ll be forever grateful.

I’m sure you’d agree with me when I acknowledge the extraordinary job that Annastacia and her parliamentary team have done in holding this reckless government to account.

Our great MC tonight, Martin Pook, has been phenomenal in his role as campaign director and can I just take this opportunity to publicly thank him for what he has done, and to thank the small group of volunteers who have already achieved so much. We will need more help if we are to get this seat back for the ALP.

Tonight marks the official beginning of a better deal for the people of Chatsworth. In the last 2 and a half years, the Campbell Newman Government has ripped and torn at the fabric of what holds this electorate together. The people of Chatsworth are honest, hardworking people and the first thing Newman did was take their jobs. My next-door neighbour. My wife’s best friend. Don, one of our hard working volunteers who after 30 years of service, was shown the door. It was a turning point for me, seeing people I cared for suffering for no reason other than ideology. It was at that point that I decided that I had to be more involved, to try and find a way to better serve my community.
Since that time, things have not improved. Cuts to WorkCover access, cost-of-living increases, health cuts, cuts to bus services, low wages, poor education funding, lack of infrastructure, asset sales and broken promises have continued to hurt the people of Chatsworth. This Government has attacked the very people they are supposed to represent.

I worry about where workers’ rights are headed. With changes having made it increasingly difficult to claim workers compensation, and a clear desire from the LNP to drive down wages and conditions, we seem headed towards an era long-forgotten. I was reminded by my father-in-law the other day of his story from the 1970’s about his teaching partner leaving his school, resulting in John having to teach a class of 78 grade 5 children for the year. You may think it unlikely to happen again. My wonderful wife Louise, who is also a teacher, was discussing this story the other day with me and told me that her region is currently so short of relief teachers that some teachers have been asked to combine classes when teachers are away sick.

This Government has attacked workers of all types. It fired public servants after telling them they had nothing to fear. It has attacked doctors, lawyers, nurses, firefighters, scientists, teachers and even the integrity commissioner.
Now what has the current member done over the last two and half years? He has used his time in Parliament to give lessons on Greek history and the importance of federalism. He has grabbed his pom-poms and been the best Campbell Newman cheerleader he can be.

The people of Chatsworth deserve better.

This area was built by Clem Jones. His legacy is everywhere in Brisbane City, and nowhere is his legacy more visible than my home suburb of Carina and the Centre which bears his name. This is the electorate of Terry Mackenroth, a man who helped reform the Police Service that I so proudly work for, a treasurer and deputy premier who made Chatsworth and Queensland better than how he found it. This is the electorate of Steve Kilburn, who had the courage to stand up and tell the truth even when it could have cost him everything. In his time, Chatsworth got a new police station, a refurbished PCYC, a Gateway upgrade and improved bus services. These 3 men had vision, integrity and courage. I am committed to upholding the legacy of these men and the Labor values that drove them.

I’ve had the great honour of being able to serve my state these last 8 or 9 years and am very proud to be a serving Queensland Police Officer. In that time, I’ve seen a lot of people who have suffered. I’ve seen the result of what happens when social policy goes wrong. I’ve seen injustice, and I’ve done everything in my power to stop it. I’ve stood up for people that couldn’t stand up for themselves.

It’s that desire to help people, to fix things, to fight for others that has led me to where I stand now. I’m now seeing family, friends, neighbours and members of my community suffer for no good reason other than the whim of a Government that simply doesn’t care. Governing for them is about dollar signs, not about people.

I stand before you as part of the solution. I will carry the same courage, integrity and commitment in Parliament as I have on the beat. I will be a part of a team who will actually listen to Queenslanders. A team that puts the future of our children first through a commitment to education. A team with the integrity to make Government accountable again and make ridiculous campaign donations declarable. A team with the courage to take on the causes of alcohol-fuelled violence. A team that will put people first.

We need you to stand up and fight for the things that are most important to you. To fight for Queensland.
I need you to help me win this seat back for the ALP so that the people of Chatsworth will have a voice again.
I will fight for a better deal for Chatsworth.