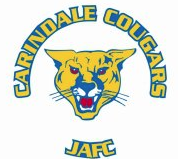 With the signing of their first female AFL player at the start of their 21st season, as well as their first former player’s drafting to the Brisbane Lions squad, Carindale Cougars Junior AFL Club has twice the reason to celebrate.

Grace Maddock, 8, is the first girl to play AFL with the Carindale Cougars since the club’s inception in 1994.

As the AFL pushes for increased female participation nationally, President Alistar Moir is confident that this is only the beginning.

“I would love to field a team of young girls in the junior competition. I believe it would be a first in Brisbane,” Alistar says.

Another important signing for the club was former Carindale junior, Matthew Hammelmann, being selected by the Brisbane Lions via the NAB AFL Rookie Draft for 2015 season.

Matthew was a Carindale Cougar from 2004-2007 and rose through to senior football at Morningside, before joining the Lions Academy to further hone his skills.

The Cougars have come a long way from the three teams fielded in 1994, when 43 boys pulled on their blue and gold jersey to represent Carindale Districts.

Based at Belmont State School, Registrar, Lori Marshall, is looking forward to the club’s sign-on days: Saturday February 7 and Sunday February 8 from 10am – 2pm both days.

“With 85 players registered last season, I am confident we can build towards 100 participants, which would be a fantastic result for the club’s 21st season,” Lori says.

Training for the Carindale Cougars players commences March 12 at Belmont State School on Thursdays from 3.30pm with games commencing Saturday May 2.

For those who can’t wait until March to pull on their footy boots, AFLQ is running an 8 week Auskick program out of the Cougars grounds, kicking off on Saturday February 14, from 8.30am – 9.30am for boys and girls aged 5 – 10. Registration for Auskick is at www.aflauskick.com.au.

Along with Lori, Club Treasurer, Rudi Von Varendorff, will be on hand to sign on any Auskickers who would like to continue to develop their footy skills through the footy season proper.