Health and wellbeing for people of all ages and cutting traffic congestion were hot topics on the agenda for the monthly Carindale & Eastern Suburbs Community Forum at Pacific Golf Club on Wednesday night. 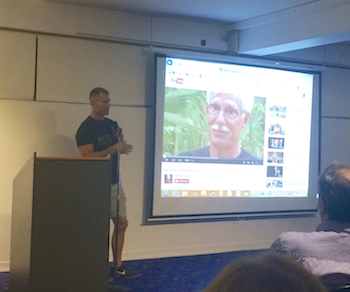 Rowan Baxter of Integr8 Fit kicked off proceedings speaking about the importance of keeping active at any age.

The former New Zealand Warrior and seasoned personal trainer made the comparison of the movement of young children and adults – whilst kids are always outside on the playground, adults generally become gradually more static as they age, leading to high proportions of “life-changing” falls requiring hip replacements in the Western world.

He shared the story of Stephen Jepson, an American man in his 70s who has the vitality of an active teenager who lives by the motto “never leave the playground”. In a short video, Stephen shows all the relatively simple techniques that he uses to keep healthy and active, making the point that anyone of any age can do it.

Rowan and Integr8 fit run classes for people of all ages and abilities at their gym at 25 Dividend St, Mansfield.

Traffic in Brisbane has become a frustrating and debilitating issue, with many journeys involving the Pacific and Gateway Motorways often taking far longer than they ought to. 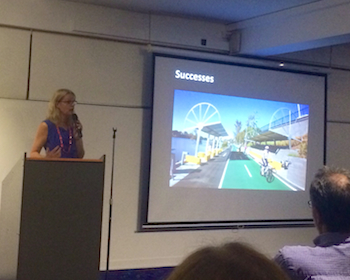 Rachel Smith, a world renowned transport planner, fuelled a discussion on how to create more functional transport systems for Brisbane.

Rachel stated that, whilst Brisbane has some of the best transport infrastructure in the world, there is still a long way to go to solve some of our horrendous traffic debacles. Rachel is a Principal Transport Planner with AECOM and was a specialist advisor for the UK Government for 6 years.

“We all want to spend more time with family and less time sitting in the car,” Rachel said.

More than half of Queenslanders surveyed stated that they would cycle to commute if it were safer to do so and could be done away from major roadways.

Rachel used the Netherlands and Bogota, Colombia, as examples of highly successful cycling communities, where cycling lanes are separate from roads and cater to cyclists of all abilities – from a six-year-old on training wheels to Lycra-clad fanatics. 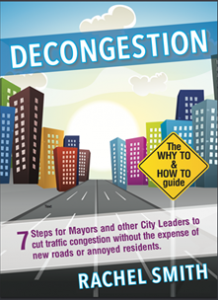 She also said that sustained and confident investment from governments in efficient mass transit is required to solve congestion.

The talk came in the wake of Councillor Adrian Schrinner’s push to get the Eastern Busway extension from Coorparoo to Capalaba back on the agenda.

Rachel Smith has recently written a book on the topic of solving traffic problems called ‘Decongestion’.

The Carindale & Eastern Suburbs Community Forum is held on the last Wednesday of every month (except for December and January). It is hosted by Glenn Millar. Contact Glenn for queries or topic suggestions for future forums. glenn.millar@remax.com.au or 0414 991 474.