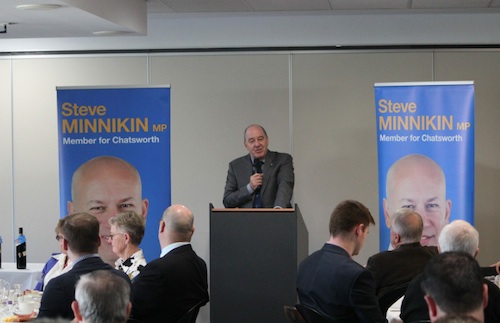 “The quarterly business breakfast is a good way to keep in contact with the business community, both locally but also from greater South East Queensland,” said Steve Minnikin.

“We make sure that we have a guest speaker at each event, normally it’s been a fellow MP but this morning we were honoured to have the former Premier of the state, Rob Borbidge.”

Guest speaker Rob Borbidge entertained the crowd with anecdotes and insights into running a minority government, a similar predicament faced by the current Palaszczuk administration.

Following his speech, the former Premier held a Q&A session, where he answered questions on subjects such as the Uber and taxi regulation issue, the duplication of departments at multiple levels of government and several strengths and weaknesses of the state government led by Campbell Newman. 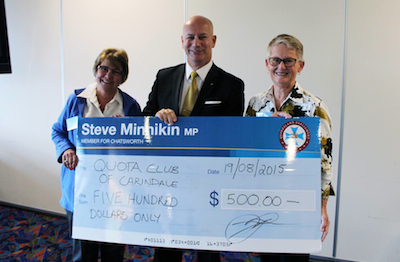 Proceeds from the breakfast totalling $500 were presented to the Quota Club of Carindale, a local organisation which assists charities such as CleftPALS Queensland and the Aspergers Syndrome support group.

The Quota Club of Carindale team’s 11 members have been working in the local community for 28 years, also drumming up support for the towns of Condamine and St George following the widespread destruction caused by ex-Tropical Cyclone Oswald in 2013.