Catchment Manager of the Bulimba Creek Catchment (B4C), Wayne Cameron, says there is potential for the Department of State Development (DSD) and the Queensland Rifle Association (QRA) to join forces in protecting the native environment of the Belmont Shooting Complex.

Mr Cameron said he had long-standing fears about a bund erected on the State-owned land, built around the parameters of the area at the beginning of this year.

“The complex is a multi-purpose block with both environmental and recreational purposes. We want to get the environmental purposes up to scratch with the bund,” he said.

The bund was engineered in consultation with the Department of National Parks Racing Sport and Recreation, Department of Environment and Heritage Protection, The Gold Coast Commonwealth Games Corporation and the Department of State Development (DSD) to reduce existing noise levels at the shooting complex.

Mr Cameron said his concerns related to the bund’s surface protection. Since its construction, there have been two remedial works to the ‘eco blanket’ – the protection of the bund’s soil from erosion.

There is now a third remediation plan underway to rectify further damage.

“There really needs to be a guarantee of the long-term stability of the bund.”

“Mt Petrie is a very important part of the koala bushlands. It’s a biodiversity hotspot, so obviously, as a catchment group we have an interest in it.”

A further concern related to the vegetation of native plants around the bund precinct.

“At the moment there are cover crops in the form of Rye grass and Japanese millet on the bund, but there’s no extensive growth of native plants,” he said.

To bring these issues to light, B4C met with relevant parties to discuss their environmental concerns on July 6th. 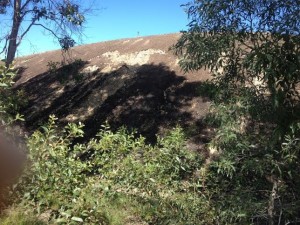 Photo from May 2015 following a second round of hydromulching.

“We have been told native crop seeds have been planted on the bund and we have now been told, since the meeting, that there is a delayed germination of those seeds.”

Andrew Mayfield, President of the Queensland Rifle Association, said a native shrub and tree mix has been incorporated into the landscape design.

“It will take approximately 18 months to establish the native vegetation on the berm, but germination of the native species has already commenced amongst the grass (cover crop),” Mr Mayfield said.

He said heavy rainfall was to blame for the reoccurring damage to the bund’s eco blanket.

“The berm sustained superficial rain damage in the early stages of the vegetation process and further landscape treatment is scheduled to rectify this in the coming months.”

Mr Mayfield said the QRA are also taking into consideration the specific environmental importance of the area.

“QRA will work with the State Government to provide as much koala tree offset planting as can be achieved across the entire complex.

“We are proud and protective of the koalas, wallabies, possums, scrub turkeys, wood ducks and other fauna populations established on the site.

“Environmental protection of the site in perpetuity is a goal of QRA.”

A spokesperson from the Department of State Development said the State Government is facilitating the landscaping of the rifle range in consultation with the QRA and B4C.

The spokesperson said the structural integrity of the bund has not yet been compromised.

“The acoustic berm has not ‘collapsed’, however some minor surface slippage was experienced on two occasions due to unseasonal extreme downpours.

“Remedial action to the berm will occur in the coming weeks once programmed shooting events are completed in the Duncan Range.

“The QRA are acting as asset operator of the berm.”

The Spokesperson did not comment on the future opportunity for B4C and community representatives to be involved in the landscaping process.

Mr Cameron hopes their proposed partnership, where B4C could be involved in ‘master plan’ for fauna movement solutions and revegetation, will be accepted by the Department and QRA.

“We hope they will include us (…) in choosing species and creating a habitat that will maximise revegetation in and around the bund.

“They have an obligation to manage it in an environmentally safe way and we believe we can help them with that,” Mr Cameron said.

He explained that a further issue touched upon at the July 6th meeting related to wildlife movement of flora and fauna within the area.

“There are simple things we could do together to address the major east-west connection to Belmont Hills and Bulimba Creek via the Greendale Way underpass to the Gateway Arterial.

“We could work together to get something going on this known key link,” he said.

B4C acknowledges the overall positive effect the rifle range has had on wildlife and biodiversity, in protecting the site from further intensive development and changing its land use.

“With this in mind, we believe the site the can gain further credibility from providing a plan for fauna movement solutions and being proactive in achieving wildlife movements,” Mr Camerson said.

In the latest developments, B4C was invited to comment on a proposed landscape plan to the Duncan Range by the DSD on August 18th.

In relation to the bund, B4C proposed a “contingency revegetation plan”.

“A plan like this would ensure the bund is adequately revegetated and would give medium term revegetation growth ready for the Commonwealth Games,” Mr Cameron said.

“We are hopeful that the Commonwealth Games will have a venue that is enhanced both amenity and landscape wise.”

The State Government plans to undertake minor improvements to the Belmont Shooting Complex in order to accommodate the event in 2018. This will include minor parking and bus accessibility adjustments.