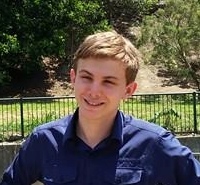 Bryce Heaton had a chat with Torryn to find out more about our region’s newest nominee.

So Torryn, it appears it was a late call up but you have the nod to represent Labor for Chandler Ward in the upcoming local election, congratulations. Tell us a little bit about yourself, where did you go to school and when did you graduate?
Morten Bay Boys College, 2012.

You’re a student, where and what are you studying?
Australian Catholic University, Teaching for Secondary Education.

What kind of experience do you have in a political context?
Having been in the party for about two years now I have volunteered on quite a number of different campaigns, helping with door knocking and phone calling in particular. This has given me a great opportunity to talk to the local community and get to know the issues that people are concerned about.

Which politician would you describe as your greatest influence?
That is a tough question because I don’t have the one politician that has really influenced me because my political views have come about by looking at a large variety of different leaders and ideas, so I have several. Though Gough Whitlam is definitely up there.

Let’s talk policy. Obviously in the last few weeks both the LNP and Labor have announced light rail proposals for Brisbane’s inner-city. How do you think Labor’s proposal would benefit the citizens of Chandler as opposed to the LNP’s model?
The introduction of a metro system would never be able to match the coverage of Rod Harding’s proposed tram network without being ridiculously more costly and taking far longer to implement, as we will be building our proposed network above ground rather than digging even more tunnels under the city. With an effective Tram Network in the Brisbane area, it will free up Buses for use in suburbs across Brisbane as well as Chandler. It will also reduce congestion across Brisbane which affects drivers as well as those taking public transport already.

You’re critical of the LNP’s plan to upgrade Kingsford Smith Drive, a major artery linking the city and the Gateway, as well as providing a toll-free alternative to the Airport Link tunnel. How else do you think the $650 million pitched for the project ought to be spent?
The proposed Kingsford Smith Drive would only save 60 seconds of travel while costing $650 Million. That money would be better spent across Brisbane rather than in just one place. It would be better spent on addressing traffic congestion within the suburbs through projects like upgrading roads such as Wynnum Rd.

The Eastern Busway has been Chandler’s most tangible proposal for a traffic-free link to the city over the past decade, however has failed to get off the ground following the costly Buranda-Langlands Park extension. How close to the top of the pile would an Eastern Busway be on your agenda as councillor?
Accessibility to reliable and affordable public transport is a big issue in Chandler. Rod Harding has announced the Eastern Transitway along Old Cleveland Road as well as, more recently, $20 million towards urgently-needed bus services for the suburbs.

The lockout laws have polarised opinion down the east coast of Australia. Enacted in NSW, rebuffed with a resounding ‘no’ in Victoria and now passed in Queensland by the Palaszczuk government. As a young person representing the demographic most effected by the changes, what are your opinions on the controversial lockout laws?
I respect the decisions of both the ALP in Queensland and the LNP in NSW for taking action in an attempt to prevent alcohol fuelled violence.

Cr Schrinner notched up over three-quarters of the vote in the 2012 local election. Many, including the ABC, describe Chandler as a very safe LNP seat. Do you give yourself much of a chance?
While it is believed to be a very safe LNP seat, nothing is impossible and anything could happen in this election!

The ultimate goal of victory aside, what are your goals for the election period?
My goals for this election is to get involved in the local community as best as I can, and to learn about what issues have to be addressed. It is an exciting and eye opening experience.

What sort of music do you listen to?
Well that is a difficult question. Good music? I am quite random with my music tastes. I listen to a bit of Queen, Pendulum, and Gorillaz. These are just some of the bands I listen to.

If you could have a one hour conversation with any three people – alive or dead – who would they be?
Well I guess I would have to choose Jesus, Buddha and Krishna. They would be rather interesting conversations.

What sort of books do you read?
A variety of books, including both fiction and non-fiction. I recently read The Eagle Has Landed and a book about all of the Australian Prime Ministers.

What would be your last meal?
Something with pasta probably.

Hillary Clinton or Bernie Sanders?
Bernie Sanders because has kept to his message for his entire career, fighting for human rights and equality. While I would not mind Hillary winning either, Bernie’s push for affordable healthcare and education are two ideals that I strongly agree with. So I’ll have to say that I am feeling the Bern.

The local elections are set to be held on Saturday 19 March, with Cr Adrian Schrinner (LNP), Torryn Saker (ALP) and Geoff Ebbs (GRN) on the ballot for Chandler.