This month’s Carindale & Eastern Suburbs Community Forum hosted candidates for the Federal seat of Bonner in a friendly session at Pacific Golf Club.

On Wednesday evening, current Member for Bonner Ross Vasta (Liberal National Party) and candidates Laura Fraser Hardy (Labor) and Ken Austin (Greens) introduced themselves and their respective policies before answering three questions regarding the Gonski reforms, national debt and the Inland Rail project. The candidates did not take open questions from the crowd during the session, but hung around afterwards so they could answer queries from the throng individually. 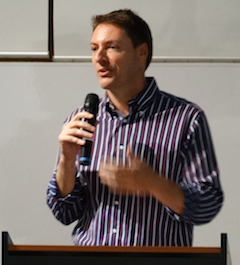 Ross Vasta, current Member for Bonner from 2004-2007 and 2010-present, opened the forum and reiterated the Turnbull government’s plan to improve jobs and growth in Australia.

He mentioned his recent tour of Grove Juice, a Mansfield company, with the Prime Minister, stating that it is businesses like these that the Coalition plans to support with tax breaks in order to encourage economic stimulation.

Vasta also promised federal funding for an upgrade of the troublesome Chelsea Road/Rickertt Road intersection in Ransome, and guaranteed funding for health and education in Bonner under Malcolm Turnbull. 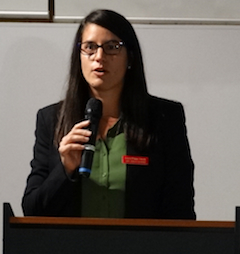 Laura Fraser Hardy, the candidate for Labor who ran against Ross Vasta in 2013, opened by acknowledging the traditional owners of the land.

She lambasted the Abbott and Turnbull governments for attempting to privatise universities, TAFEs and Medicare, as well as selling out on marriage equality and climate change.

She also spoke of Labor’s plan to reform negative gearing and to fully fund the Gonski education reforms. 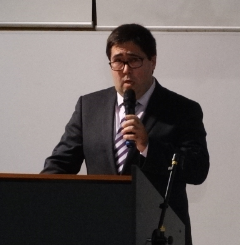 Ken Austin, a QUT law student and candidate for the Greens, stated that his party would take real action on serious issues if elected to government.

He discussed devastating coral and mangrove bleaching in the far north as signs of an environment crying out for substantial protection, and jovially took a swipe at the major parties for endorsing the Greens policies on taxation of multinational corporations and negative gearing.

Austin, a member of the Greens for six years, said that the Greens would bring Australia into the 21st century and a new economy, with high skilled workers and a bolstered renewable energy sector.

WHAT THEY SAID ON…
Gonski
Austin (GRN): The Greens will implement the Gonski reforms in full ($37 billion over the next decade), public education will receive a bulk of the funding as every child as every child in Australia, not just of privilege, should be able to receive a world class education.
Fraser Hardy (ALP): Labor will implement the Gonski reforms in full and on time as per their “Your Child, Our Future” plan, supporting every student with tailored programmes.
Vasta (LNP): A Turnbull government will spend $1.2 billion on education by 2019, being careful to ensure the money goes toward achieving tangible results, as since 2000 Australia’s spending on education has increased but our world rankings in academia have fallen. Public schools will receive more of an increase in funding than private schools.

National debt
Fraser Hardy (ALP): Bill Shorten has promised $70 billion in savings under a Labor government through tax and negative gearing reforms. The Abbott/Turnbull administration tripled the national debt despite cutting services and increasing taxes to a level not seen since the last year of John Howard’s Prime Ministership.
Ken Austin (GRN): Returning the budget to surplus is less important than stimulating the economy and growing GDP. The Greens promise to get the money out of bank accounts in the Cayman Islands and back into the Australian economy.
Vasta (LNP): The Coalition is committed to constrain spending, show fiscal discipline and keep taxes low. The Abbott government inherited a huge deficit from Labor, who proceeded to thwart attempts to reign in expenditure whilst in opposition. Investment in important infrastructure is paramount.

After the candidates addressed the audience as a whole, guests could speak with them one-on-one.

Inland rail
Vasta (LNP): The inland rail project is vital for the economy, cutting freight transit times to Melbourne by up to 10 hours, but any potential route will have heavy public consultation before construction. It would take trucks off the roads, create 1600 jobs over the time of construction and 600 jobs once fully operational. I support the option of a tunnel from the Port of Brisbane to Acacia Ridge.
Fraser Hardy (ALP): Labor has been continually invested in this project, whilst the Coalition government omitted funding for inland rail in the 2014 and 2015 budgets, committing inadequate funding during an election year. Community consultation on the project would be important for Labor.
Austin (GRN): The planned route along the Gateway and Logan Motorways cuts right through some of Brisbane’s dwindling koala habitat, whilst a tunnel option would be vastly expensive. The Greens would seek another safe, clean and sensible route for the inland rail.

Following the political session, former Carina State School teacher Keith Tasker spoke about the school’s grand plans for celebrating its centenary in 2017. Keith is looking for any Carina alumni looking to get involved, especially any former band members. If you are part of the Carina alumni, you can find out more at the Carina State School Centenary Celebrations Facebook page.

Phil Henderson gave a talk about the 2016 Shitbox Rally, which ran from Mackay to Hobart earlier this month. The Rally raised $1.53 million for the Cancer Council, and involves participants taking a car worth less than $1000 on a long distance journey which has run annually since 2010 and has become the greatest single contributor to the Cancer Council in Australia. It’s essentially an en masse Top Gear style challenge for a good cause, and you can learn more about it on the Shitbox Rally website.

The Carindale & Eastern Suburbs Community Forum is held on the last Wednesday evening of every month at the Pacific Golf Club, 430 Pine Mountain Rd, CARINDALE. Local resident and RE/MAX United Vision sales associate Glenn Millar generously gives up his time to facilitate and MC the forums. Tea and coffee is provided, as well as informative presentations on local events, politics, businesses and services.