The following is by Wayne Cameron of local group B4C. You can comment at the end or write your own ‘letter to the community’ via the ‘contribute’ menu button above. 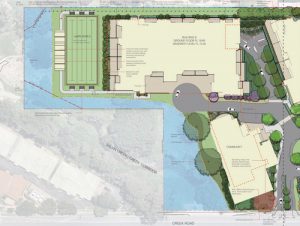 The public should be able to rely on its local printed press to provide accurate and unbiased information about development issues which could impact on the community and the local environment. Is this a far-fetched hope?

The South-East Advertiser has run a series of prominent articles, in recent weeks, about the TriCare Development at Creek Rd, Carina Heights. The thrust is that a dilapidated buildings, left in disrepair for some time, should be removed and cleaned up.

Passing motorists (labelled local residents) have been surveyed for opinions about the “eyesore”. One said she did not notice the buildings as she watched the road.

But the newspaper did not mention that the TriCare development is encroaching on the Salvin Creek Waterway and Environmental Corridor (designated in City Plan). It is also listed in the BCC Biodiversity Overlay Map and Code as “High Ecological Significance”, linking Whites Hill Reserve to Bulimba Creek.

TriCare was given approval with a section of the corridor left in its ownership in May 2016. Council placed a designation of Environmental Protection Area (EPA) on it and required native rehabilitation and revegetation to grant the approval.

On September 2nd a new application was lodged with Council claiming “permissible change”, (a few days before the press campaign about “dilapidated buildings”). Permissible Change has no requirement for public scrutiny or appeal rights.

The public would only be likely to know that the waterway corridor was protected by the EPA and was to be returned to bushland corridor.

My letter to the editor did not get a run, but the News Editor said he would provide me with a chance to put my side of the story in the paper. It was printed in the September 28 edition.

I would like to now elaborate on the lack of facts and care in this small (single column x 16cm) article.

So I pose these questions:

1. If, in such a small article, they left out most facts affecting the waterway and the planning scheme, and got so many of the basic things wrong – was it a sincere attempt at providing impartiality of reporting?

2. What was the real purpose of the prominent newspaper articles, whipping up support for demolishing the dilapidated buildings ASAP? TriCare has articulated this in these articles . . . “as soon as Council approves our changes, we will demolish the buildings”. The implication is “Council – you must approve our changes or be labelled as the cause of the on-going poor state of our buildings”. Just approve it and the public pressure will come off Council.

3. As for community concerns (outside of the environmental and recreational). A staged development over 15 years. Apparently the local residents have no problems with noise, dust and traffic disruptions over such a long term on a maximised urban development. Or should they have been properly put in the picture?

Big developers have plenty of influence on decision-making and TriCare appear to be given a dream run in promotion of their objectives in this case. Nevertheless, don’t write off the local community or community groups, who put their bodies on the line, to represent them in liveability by caring for wildlife and the environment.

The truth may set us free.