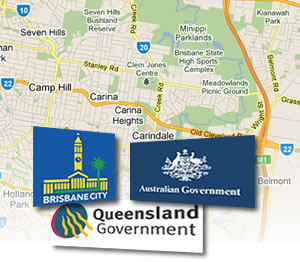 Here are the Brisbane politicians who represent Carindale, Carina and surrounding regions.

We invite ALL local representatives to contact us with information relevant and/or important for locals residents, groups and businesses.

If you’re a resident with queries/concerns/ideas about issues related to the region, we welcome you to submit your letter to the edit / article to us for publishing on Carindale Connect.

Di Farmer – State Member for Bulimba
Homepage | Facebook page | Twitter
The electorate of Bulimba covers the inner eastern suburbs of Brisbane. It is bounded on the north and the west by the Brisbane River and, as at the 2009 election, covers the suburbs of Bulimba, Balmoral, Cannon Hill, Hawthorne, Morningside, Norman Park, Murrarie and Seven Hills.