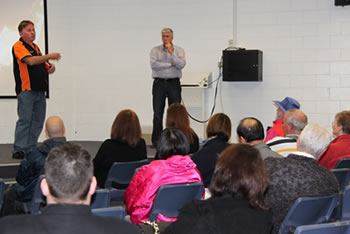 On Wednesday night a group of locals got together in what will be a regular community forum.  Belmont State School kindly provided the venue thanks to Heather Smith, President of the school’s P & C.

Glenn Millar, the group’s host and coordinator, said that when he initially told people about starting the group, many were hesitant as they were concerned it would be a committee arrangement. Well, this group is a committee-free zone and Glenn made it clear that he wanted a simple format. I really commend him for both starting this group and for keeping community at the heart of it. 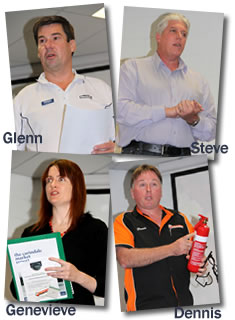 I spoke about Carindale Connect and the ways people can get involved with the site.

Then we heard from Mike Rainbow, who was a key part of the Carindale Progress Association, joining the Association in 1983. Mike was involved in extensive tree planting when Carindale was in its early development stage. He said he’d like to see the University of the Third Age (U3A) have a presence in this region. He attends the Redlands Bay U3A and believes there’s great potential for this organisation in Carindale. I was really interested to hear Mike talk about community and the region and I hope to speak to him again soon about some of his great knowledge of the region and his ideas.

The main topic on the agenda for this first meeting was fire safety with State Member for Chatsworth (and ex-fire-fighter) presenting. This presentation genuinely made me realise that I underestimated the power of fumes and heat and the speed at which a fire can spread.

Steve was joined by Dennis Lothian, Director of Smoke Alarms Brisbane. His company, which is located in Carina, kindly donated a fire safety pack as a raffle prize and provided some really useful information on what the different products do and some typical scenarios.

Local resident Dean said he found it a really positive forum and that he’s looking forward to future events.

“It was very fruitful, interesting and undoubtedly a sign of great things to come for the local community and surrounds”, Dean said. 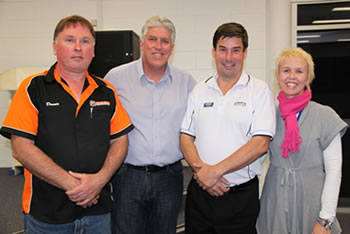 It was a friendly gathering and most people stayed back afterwards to talk over coffee and biscuits.

Glenn, who is a sales consultant at local Harcourts and has lived and worked in the Carindale region for over 17 years, has an open mind as to what the regular meetup can entail. He welcomes people to share their ideas for future topics. Issues to be discussed in future forums include policing, sustainability, power of attorney and a range of other matters.

The topic of neighbourhood watch was raised a few times and it’s generally agreed that, while very important, as a topic by itself it can be hard to gain traction. Dealing with neighbourhood watch issues can be done more effectively from a holistic point of view, by getting more topics and more residents involved. So I imagine that it will be incorporated within the forum.

It was a great forum and I see a strong future for it. I’m also really keen to see how we can use the web to attract more residents to the forums and to give exposure online to the topics discussed in each meeting.

Video: Steve Kilburn MP at the start of his presentation.