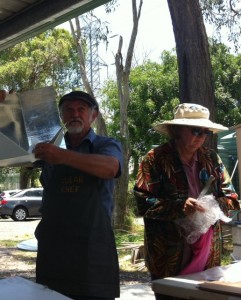 **Sizzling Solar Systems will be at Carindale’s Green Heart Fair on Sunday 13th October 2013 – go and say hi and check out their amazing cookers!**

I expected solar cooking to be more complicated, slow and requiring the purchase of expensive or difficult-to-acquire items. But my assumptions were totally wrong.

Brisbane’s Stan and Jane Cajdler both have a great deal of knowledge and experience to share about this method and are striving to get communities as addicted to a solar cooking lifestyle as they are.

There was surprise among attendees upon seeing how quickly one of the solar cookers, named the Death Ray, started burning a piece of wood. When asked to guess how long it would take to start burning, some attendees said five minutes, someone else suggested eight minutes. Then we witnessed that it was pretty much straight away.

There are three main types of solar cookers that the presentation covered. The panel cooker has base panels and a reflective surface. The box cooker has a transparent top lid, external reflectors and wall insulation. And the parabolic cooker is a concave reflecting dish. It can be made from a TV satellite dish or similar shaped item.  Stan and Jane’s parabolic cooker has office chair legs with castor wheels underneath which provides good height as well as mobility. According to their website, purchased versions are made with a steel or alumunium framework and reflective panels of thin silver anadised aluminium sheets shaped and nailed to form a parabola.

Stan discussed sun efficiency and how you can add reflectors to act as “additional suns”. He also showed us how pizza boxes can be used as bases for solar cookers, which is popular when they demonstrate in schools. We were also shown a solar dehydrater and the various enhancements that can be added to make it work even more efficiently.

“A normal oven you have to heat it for say 10 minutes or so beforehand. As soon as you put this out in the sun, it starts cooking,” he says.

“We travel the country, wherever we are we’ll set up a cooker.”

Jane says she gets a great deal of enjoyment from cooking with solar power.

“A stew on the stove top tastes a certain way, but if you bake it in the oven it has a special oveny taste, like nicely baked all round. That’s what happens with solar cooking because it’s baking on the base, at the sides and on the lid.”

After seeing the simplicity and considering the environmental, financial, health and enjoyment benefits I was surprised to find there has been such little take-up of solar cooking in Australia.

Stan says he would like a local community to really embrace it and spread the word further.

Stan and Jane mentioned Rolf Kuelsen, who I wrote about earlier this year, a local who cooks with solar cookers.

Carindale local Glenn Millar was one of the solar session’s attendees and he was visiting the Southside Sustainability Centre for the first time.

“It was refreshing to see the old land under the Energex power lines being put to good use with hens, chicks, roosters and all sorts of sustainable gardens – from amazing corn, to raspberries,” he said.

Glenn says he was blown away by how simple and quick the solar cooking process was and how tasty the food was.

“Stan and Jane have obviously spent many years doing trial and error to perfect their skills and knowledge – all to our benefit,” he said.

“I cannot believe that with some cardboard, some silver paper and an old billy – and the sun – you can cook all sorts of things.”

Glenn, who runs the Carindale Community Forum, says he would like to have Stan and Jane as guest speakers at one of forums in the new year. I agree, however a sunny day demo really helps to get among the hands-on solar action.

Through their business, Sizzling Solar Systems, Stan and Jane advise, consult and provide demonstrations on DIY construction and usage of solar cookers. If you want to find out more about solar cooking you can contact Stan on 0417 609 860 or stan@sizzlingsolarsystems.com

Have you had any experience with solar cooking? We’d love you to share it with us.