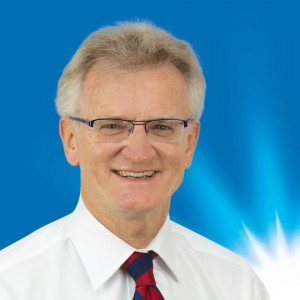 Dr Bill Glasson is the Federal LNP Candidate for the seat of Griffith.

I asked Bill about his political background, motivations and what he likes about where he lives.

Bill lives in Hawthorne. He is an opthamologist and was president of the Australian Medical Association in 2003 and 2004.

He has practised as a medical specialist in Brisbane since 1988, while also providing services to rural Queensland. He worked as a volunteer aid specialist overseas for several years, predominantly in East Timor.

“It has been a privilege to enhance people’s quality of life by restoring or improving their sight. But I have learned that medical problems can be just the tip of the iceberg,” Bill says.

“To help create a better life, this area needs a representative who will focus completely on the needs of the people and the community.

“With my wife, Claire, we have raised three children here and now they are adults I can now devote my energies, experience and life skills to being the voice of the Griffith electorate.

“It is a privilege to live in this area but there are many aspects that can and need to be improved. I will work hard to bring about change to create opportunity and deliver the benefits the people of Griffith deserve.

“We need to get government off the backs of business people, cut through red tape and slash the runaway cost of living. These are high on my list of priorities.

“Asking people for the responsibility to be their voice in national parliament is a serious commitment. It demands dedication, determination and a willingness to serve selflessly in the best interests of others. I want to accept this responsibility because I believe I can make a difference.

His father is late William Glasson, a Queensland Minister for Lands and Forestry.

“You may say politics is in my blood.”

Bill says he is engaging residents through “a grass roots approach”.

“Our team has close to 200 volunteers who are regularly out in the electorate helping me spread my message.”

He recently put a petition through council to update facilities at the Colmslie Reserve, receiving over 800 signatures.

“A constant message I get from local businesses is that they are hurting badly. It’s a dreadful shame that Labor is strangling them with higher taxes and red tape as they are key drivers of our community and overall economy,” Bill says.

He has been visiting schools and universities, community groups, Neighborhood Watch forums, sports associations, church groups and the like.

When asked about his spare time Bill says he enjoys fitness, often going for a run, cycling and attending Quany’s Gym at Woolllongabba.

“Spending time with family is important and for Valentines Day I took my wife to Foxy Bean Café at Wolloongabba which is a favourite of ours,” Bill says.

“I love the sandwiches at Maxine’s Lunch Bar in Morningside and the Moroccan-spiced barramundi at The Fishmonger’s Wife in Lytton Road is to die for.”

“And I know I’m a bad boy but I salivate over Glen Higgs’ special lunch rump steak at his Café Citrus in Bulimba.”

“I am an avid reader and particularly enjoy biographies and, although I don’t understand a lot of it, Stephen Hawking’s theories on time,” he says.

Bill is the immediate past Chair of Cancer Australia; non-Executive Director, Medical Allied Professionals (MAP) Board, Brisbane and national Board member for St John Ambulance Australia.

He serves in the Reserves as consultant ophthalmologist to the Australian Defence Force with the rank of Lieutenant-Colonel.