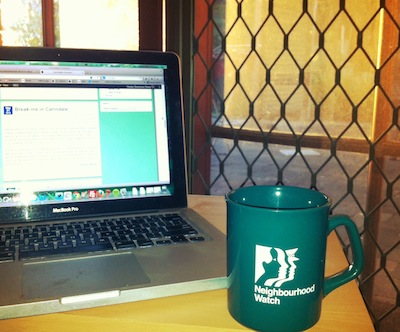 Let’s be honest; Neighbourhood Watch (NHW), in its current form, is irrelevant to most people in the community and needs to transform if it’s not to completely die. Some say it’s dead already.

I want to be part of building a safer community in the context of community-building in general. I don’t, however, want to go to meetings to discuss minutes of previous meetings or who should be treasurer etc. This is irrelevant to me and frustrating. However, there are plans in motion to revitalise Neighbourhood Watch.

Carindale Connect was a promotional partner for the Good Neighbour Security Expo held at the lower ground hall of Mount Gravatt Showgrounds last month. This event brought a range of speakers and expo stands together in the one place for an afternoon. It was sponsored by local Neighbourhood Watch. It’s an example of an effective strategy to make neighbourly security and safety more accessible, practical and, let’s face it –  less tedious. There was no need to sign-up to attend, you didn’t need to know the boundary of your local NHW group or be part of one. There were interesting speakers, a sausage sizzle and a coffee cart. Obviously significant planning and resources goes into an event such as this, but as an annual event (if they choose to do it again) organised by multiple NHW groups, it can be a great way to give the NHW brand, issues and related people and businesses a useful boost. 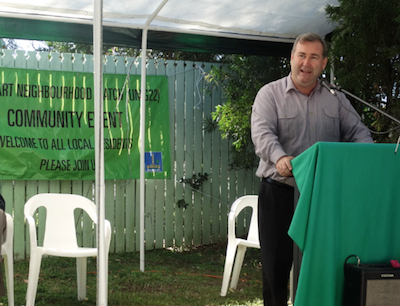 The Queensland Police Minister, Jack Dempsey attended the expo.  He told the group that $1 million in additional funding, to what is already provided to NHWQ and Crime Stoppers, will be provided to help revitalise the Neighbourhood Watch services.

He says the Queensland Police Service and Neighbourhood Watch Queensland have long worked together to inform the community.

“Technology sees that relationship evolving, yet still remain incredibly vital both to the community and to the QPS,” Mr Dempsey said.

“Expos like the one today are incredibly valuable to a local community as they provide simple tips and information on personal safety and keeping your home secure.”

Not everyone wants to go a meeting, Mr Dempsey said. He says that changes in information technolgy in NHW will make it more powerful.

“So instead of an offence happenign and just going to the police station, the whole of the community will have that advantage to be able to search out that offender,” Mr Dempsey said.

“It also reduces the fear of crime, because once that offender has been located, you’re not second guessing and looking at every person going up your street.”

It’s also a great tool for police, he added, as it frees up a lot of time.

This community interaction is already happening to a great extend with the QPS Facebook page and Twitter as well as various other community uses of social media. 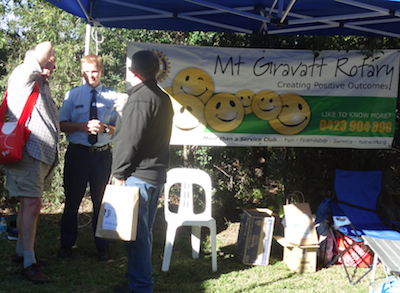 Acting Senior Sergeant and head of NHWQ Rodney Bell also addressed the group to talk about Neighbourhood Watch – what it’s been and what is planned for the future.

It has been difficult to fill NHW committee positions such as area coordinator, secretary and the like.

“If I had a dollar who for every Neighbourhood Watch coordinator who told me they can’t find someone to replace them, I’d be a very rich man,” Sergeant Bell said.

He also said the program is viewed by some parts of the community as a program just for older people, those who just want to know what their neighbours are doing or for vigil antis.

“And while we know that’s not the case, it’s a perception that particularly young people have about the program.”

“Also the Neighbourhood Watch program hasn’t embraced social media like the community has. So we’ve lacked in trying to implement those technologies to improve the program.

Sergeant Bell says it is a result of that and other issues that four years ago there were 640 NHW groups in Queensland has gone from 640 four years ago to now just 330 groups.

“I really do believe there are great opportunities to improve the program.”

“The word community has significantly changed from its original meaning. Today’s communities are much more complex, than what they would have been 20 or 30 years ago,  particularly through the modernisation of society.

“Rightly or wrongly our neighbourhoods, our cities, our towns are different from what they used to be. Some would like it to be how it was. The fact is that they are changing and we need to adapt.”

Sergeant Bell explained how people are living in their house for shorter periods, are more transient, have different social values, and commute more than they used to. He said people are taking up online technologies to speak to other people more so than “over the fence” or at meetings.

“So it’s through the update and continual advancement of technology and increase in social media that we need to use within NHW.

“By acknowledging that society and definition of community has changed we need to think about how Neighbourhood Watch can remain and can be relevant into the future and how we can do business online to embrace more people within the program.”

Local police have been working on a new model.

The plan, Sergeant Bell explained, is to use social media and a range of applications to engage a larger proportion of the community. It’s not engaging enough people under 40.

“Current NHW groups will be encouraged to transition from existing model where they require a large number of volunteers to administer their to a process where only 5 or 7 people required to administer the group.

He says that, through the local police blog and NHW Facebook pages, they will then be able to filter information out to communities. This is something that many other individuals and groups do already, but it is better late than never for the Neighbourhood Watch to try and take some leadership in this area.

Sergeant Bell says there will be far easier access to online crime stats. At the moment groups need to contact their local police department and obtaining the data can take weeks. There will also be more flexibility with joining NHW online and less geographical boundary line issues.

The new model, which has been released for feedback, is definitely taking a direction that will make NHW more accessible to the wider community.

Jim Renshaw a local NHW committee member and the coordinator & MC for the Good Neighbour Security Expo believes that NHW needs to move away from being about meetings and committees to something more flexible.

“We recognise that Neighbourhood Watch doesn’t need to be seen with a grey beard. It’s got to be seen as something that belongs to everyone,” Mr Renshaw says.

“If we can get our neighbours talking to each other, that will be a great help.”

I welcome Neighbourhood Watch groups and other locals with safety and security information to email me and see how you can get involved with Carindale Connect. You may want to provide content for the site, such as in the Neighbourhood Watch section, list your event on our events page or speak at the monthly community forum.

The residents who comment on our Facebook page may follow our page because they want to find out about dining in the area, or because of an article we wrote, or because they are interested in finding out about various local events, or some other reason. Whatever their reason, they are part of a group united by general geographic location who can quickly and easily be alerted to, or alert others to, local safety and security information.

I will be speaking at a Neighbourhood Watch Networking Event at Belmont Services Bowls Club on Monday 17th June, 7pm. It has been organised by the office of Steve Minnikin the State Member for Chatsworth as is open to all local residents interested in Neighbourhood Watch.

Disclaimer: I received payment from local Neighbourhood Watch to help with the promotion and strategy of the Good Neighbour Security Expo held in May in the lead-up to the event.