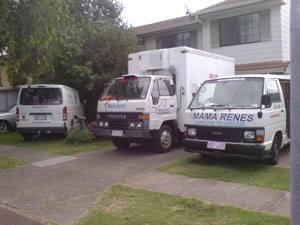 Mama Rene’s is a Carindale-based charity which takes its vans of food into the city to feed some of Brisbane’s most needy and disadvantaged people.

They desperately require financial help to be able to run their vans – for registration, fuel, electricity, maintenance and the like.

Mama Rene’s also welcomes members of the community to join them to assist feeding the homeless on Tuesday and Friday nights.

I asked two supporters of Mama Rene’s to share their experiences of volunteering with this important charity.

Arriving at the site, we were not sure of what to expect. As the Mama Rene’s vehicles arrived the people who had been patiently waiting moved aside to allow them in. The vans were unpacked and the food laid out on tables.

We didn’t know any of the other volunteers but that didn’t matter. The fact that we were there to help was enough for them to welcome us with open arms. Once we were ready, the people filed passed collecting their food – there was no rush, no haste and no rudeness, just an orderly line that kept moving until everybody had been past to collect their food. Once the food was all gone, we packed up and were on our way home. The who process took less than an hour – the organisation and the system were incredibly efficient.

These people should be proud of what they do for others in the community as they are some of many who do so much. They receive no funding and even less recognition but they do it anyway.

If you want to see an amazing charity in action go with Mama Rene’s on a Tuesday or Friday night in Spring Hill and see how efficiently they feed and support the homeless and needy.

For those who are nervous of what to expect, I have taken my two children there and they love helping out. The volunteers are friendly and fun and the homeless are so grateful and friendly. They start at about 6.30pm and are finished by 7.15pm – it’s incredible to watch and to be involved.

Your eyes will be opened at how our affluent Brisbane has so many people who need help. Get involved and make a difference.

The two clubs that Arch and Glenn are members of are also supporters of Mama Rene’s. Carindale Rotary are running a major raffle to raise funds for them. The Lions Club of Camp Hill – Carindale have included Mama Rene’s as one of the recipients of their fundraising for several years now.

Find out more about Mama Rene’s including donating and volunteering.