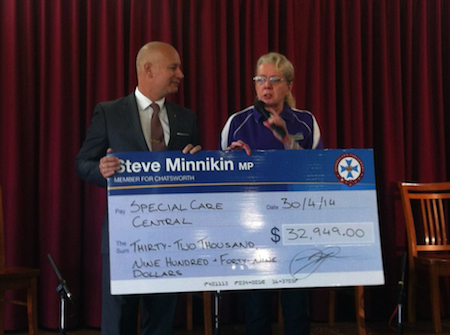 A cheque for almost $33,000 was presented to SpecialCare Central by Steve Minnikin MP the State Member for Chatsworth at the group’s information forum on Wednesday April 30 at the Belmont Services Bowls Club in Carina.

Local resident and founder of SpecialCare Central, Yvonne Campbell, called the grant a “true blessing” and, despite applying for it in November last year said it definitely “wasn’t expected”.

It was the largest amount of money the not-for-profit organisation has ever received and was awarded to them through the State Government’s Gambling Community Benefit Fund.

The money will be used to create a TV program which will focus on news and information relevant to people with disabilities and their carers such as recommended places for holidays and changes to applicable government services and funding – a first of its kind.

A promo video for the program is already in production and is expected to air within the next three weeks on Bris 31 and will also be able to be viewed online.

Content for the TV series was discussed at the forum at which the cheque was presented and attendees offered their opinions as to what they would like to see.

Many would like the program to give more information as to what funding and services are available to disabled people and their carers and to help with interpreting government messages and forms as they often contain a large amount of jargon.

Fiona Anderson also spoke at the forum and gave an update on the National Disability Insurance Scheme (NDIS) and reiterated its purpose.

Ms Anderson, state coordinator for the NDIS in Queensland, is someone “that stands up for the disabled” says Ms Campbell.

She also works closely with the government by proposing different angles of helping those with disabilities.

More forums of a similar nature are being planned by SpecialCare Central in the near future for Ipswich and Logan and then possibly on to the Redlands.