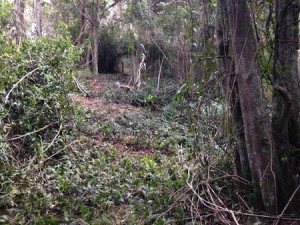 Patrols will be increased by council at Whites Hill Reserve to deter mountain bikers from illegally using the area in the wake of devastating trails being found in the area.

Rare native plants, including the Cupaniopsis shirleyana, have been destroyed by mountain bikers who have carved out trails through Sankey’s Scrub at Whites Hill Reserve.

This area is home to some of the most vulnerable species in the most sensitive ecosystem of the nature reserve.

It is illegal for mountain bikers to ride anywhere in the reserve however this has not stopped them creating trails and even building a bridge for their activities.

The trails have also caused a great deal of erosion which is highly detrimental to the reserve.

Ecology student at Griffith University and volunteer at Bulimba Creek Catchment Coordinating Committee’s (B4C) science unit Sheamus O’Connor says Shirley’s Tuckeroo is another threatened plant that is suffering due to the trails. 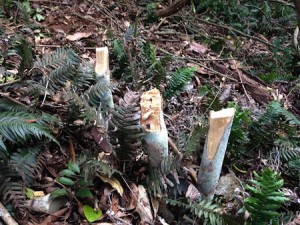 “It is listed under threatened species and is isolated genetically being that it is present in only a few reserves around Brisbane,” Mr O’Connor said.

“The ones that are left are very important because as soon as you start depleting the species you have less genetic diversity and they become more prone to diseases and not being able to adapt to climatic changes.

“So that’s why this is really bad compared to other tracks being made because they’ve actually cut down threatened species that are really important in the dry rainforest ecosystem.”

Mountain bikers do have access to trails at other reserves such as Mt Coot-tha and Daisy Hill but have made applications for access to all of Brisbane’s hilly nature reserves.

There is clear signage to say that mountain biking is not permitted in the Whites Hill reserve but Mr O’Connor says that there is always a few people riding through the area every week.

B4C manager Wayne Cameron believes those who have constructed the trails and the bridge are aware of the damage they are causing to the reserve. Mr Cameron says that opening up the reserve causes more damage than just erosion and cut-down trees. Feral animals and dogs can now get in there, he says.

“The dogs mark their territory and a lot of species won’t go near that marking so you’re virtually saying that wherever that dog runs and marks, you won’t get wallabies taking refuge there and you won’t get a lot of other species because they can smell danger,” Mr Cameron says.

There is a $500 fine issued by council for anyone found mountain biking in the reserve, but both Mr O’Connor and Mr Cameron would like to see more done to protect the reserve and deter offenders.

Mr Cameron fears that if the mountain bikers aren’t stopped we can “kiss the reserve goodbye”.

“When damage like this is induced, it’s induced to drive us away, they did it at Mt Gravatt two years ago. The purpose is to so disappoint and degrade the work that we do that we will give up and walk away on the reserves,” he says.

However president of the South East QLD Trails Alliance Andrew Wilson says that he was “disheartened to see the damage” to the Whites Hill reserve and absolutely does not condone that kind of behaviour.

Mr Wilson claims that it is highly unlikely that those who created the trails had any idea of the kind of damage they were doing because they are unlikely to understand which plants are endangered.

“To them a plant is probably just a plant,” Mr Wilson said.

Mr Wilson acknowledged that no riders should be in the Whites Hill reserve as it is illegal to do so but pointed out that the places currently available for mountain bikers to use are simply not sufficient and “Council has not kept up with demand” for a sport that is growing at a rapid pace.

Mr Wilson would like to see the mountain bikers, conservationists and council be able to work together to create a solution as he feels if more areas are open to mountain bikers they will be less likely to unintentionally destroy other nature reserves.

Also part of this debate is Councillor for Chandler Ward Adrian Schrinner who says “Council is working with local bushcare groups to identify and monitor areas within Whites Hill Reserve that are being damaged by mountain bikers.”

“We have also arranged for police patrols to occur within the reserve to deter this illegal activity,” Cr Schrinner says.

He is hopeful that the increase in patrols of the area will be enough to stop any mountain bikers illegally using the reserve.

Cr Scrinner is also not aware of any plans to make changes to legal places for mountain bikers to ride and says that “there are certainly no plans for Whites Hill Reserve to be opened up for mountain biking.”

“It’s easy for any sport to claim that they need more facilities,” he says.

“Having said this, if appropriate places can be identified that will not cause environmental damage, I am happy for additional facilities to be established.

“Naturally, if facilities are provided, it would be only reasonable for mountain bikers to contribute towards the maintenance of those facilities – just as participants in other sports do,” Cr Schrinner said.