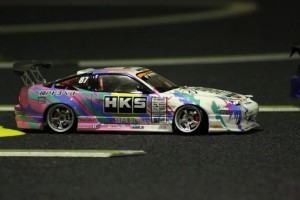 It’s a global trend that’s seen a mix of people, from school kids to grandparents, conquer steep rocky terrains and skillfully speed around a racetrack that can finish with torn off car bodies skidding at the final narrow turn.

Welcome to the world of radio-control (RC) car racing.

Drifting originally began as a form of underground street racing on the mountains of Japan, but an all-age friendly alternative was later created to swap the steering wheel for a remote.

An indoor complex in Tingalpa is one of the few places in Brisbane where RC drifters and spectators can meet up and compete.

Millennium Raceway owner Brian Burton and manager Scott Spaven describe the sport they are dedicated to as being far from child’s play.

“A lot of people don’t realise how serious it is in a way. You expect to see kids playing with toy cars, but that’s not the case,” Mr Spaven said.

“They don’t expect what they see.”

Often thanked by new spectators and racers who usually leave surprised on their first visit, Mr Burton says the hobby is something that can only be understood by experiencing it. 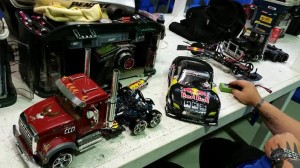 Mr Burton, who also drifts with real cars, says that while the experience is incomparable the biggest differences with an RC model is the fact there are more affordable parts available and the dangers in performing more stunts no longer exist.

From nameplates and registration labels to the family dog in the backseat, some vehicles are personalised to match the racer’s actual car in the parking lot. Others are boldly designed with flashing sirens and working taillights, or etched with stickers and stencil on metallic or neon paint.

In a club that has already drawn in 600 members, ranging from novice father and son duos to professional racecar drivers, some can be seen tampering with motors, replacing gears, and adjusting their carbon-fibre based models on a bench that stretches across one side of the complex. But many can be seeing admiring the designs of fellow drifters, and clumsily stumbling into nearby cars before quickly drifting in sync.

“I think why a lot of people are into it is because they can still do what they want on a real car but for cheaper since you’re working on a smaller scale. So, if you want a wild pink BMW, you can create that but just smaller,” Mr Spaven said. 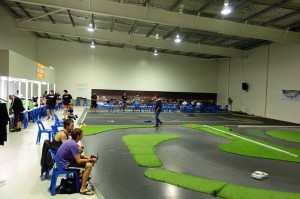 While other parts of the world such as Japan and Hong Kong may have had a head start with radio-controlled car racing, Mr Burton says Australia is now starting to catch up with the popular hobby.

With Millenium Raceway also being the first club and hobby shop to specifically cater for drifting, drifters are also now no longer limited to ordering from overseas.

But despite the awards and competitions, Mr Burton says the hobby is more about encouraging “mateship” than just finding ways to gain a competitive edge in the next race.

“It’s about mateship, mainly. We’re all about making friends and having fun. We’re like a big family,” he said.

“When you see new people come here, they can’t stop smiling. And that’s what it’s about, Mr Burton said. You get enjoyment seeing other people enjoy themselves.” 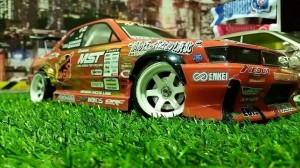 Mr Spaven added the sport is a great way to learn about cars and a broad range of design techniques.

“It teaches people about the technical side of cars, as well as different brands. There are also art skills involved, such as with making car bodies.”

Millenium Raceway, at 31 Millenium Place Tingalpa, is open from 5pm to 1-pm on Wednesdays and Thursdays, and between 5pm to 11pm on Fridays and Saturdays.

One Response to “Raceway drives big numbers with small cars”